The winner goes to the playoffs. It’s as simple as that when the Loyd Star Hornets and West Lincoln Bears square off Friday in the final regular season game for both. 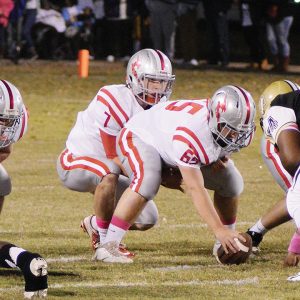 File photo/Loyd Star’s Parker Flowers hopes to lead his team to the playoffs with a win Friday.

“This is the biggest game we’ve played all year,” Loyd Star’s head coach Adam Cook said of the home game. Kickoff is at 7 p.m. at W.E. “Sambo” Smith Stadium.

“The winner goes to the playoffs,” said West Lincoln head coach Charlie Jackson, “So [we] obviously want to win.”

The Bears’ coach said his team has played hard this season.

“Offensively, we’ve moved the ball on everybody we’ve played this season, even your power teams,” Jackson said. “But there were times we struggled getting it into the end zone.”

Jackson said they played their toughest defensive opponent last week against Enterprise, so the Bears were going to go hard into this week’s game against Loyd Star.

“We’re not super-aggressive, [but] our offense will be the strongest point going into this week’s game,” he said.

Cook also feels the Hornets’ strength going into this game is their offensive line.

“We’re young but healthy,” he said, “and they’re starting to play really well. Our quarterback play has been pretty good, too.”

Jackson said he and his staff have worked all year on something you can’t really teach — mental grit. “We’re trying to get our players to play more aggressively,” he said. “We need to come off the ball harder. It’s been a struggle all year.” 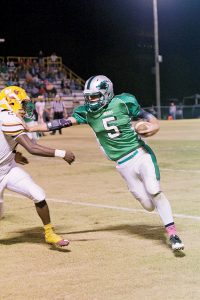 File photo/West Lincoln’s Chase Owen will square off against Loyd Star Friday with the playoffs on the line.

Cook said the Hornets’ main focus has been to get the job done. “‘Do your job’ has been our team motto. Do your job and do it well,” said Cook. “Do it violently. Give it everything you’ve got.”

With this game coming in week 10 of the regular football season — the final week for most of the high school teams — both groups know this game carries a lot of weight. The Bears have a 2-7 record and the Hornets sit at 3-7. Both teams are 1-3 in Region 7-2A play.

Last season, West Lincoln finished with a 2-8 record and Loyd Star ended with a 4-7 record, both very similar to this year’s results at this point.

Points leader for West Lincoln is Brandon Smith, with 4.8 of the Bears’ average per game of 15.1 points. Loyd Star’s average score is 29, however, nearly double that of West Lincoln. Hornets senior Parker Flowers leads his team in points, tackles, rushing yards and passing yards.

Although Loyd Star has the statistical advantage in this match-up, Cook does not feel it has affected their preparation for this game at all. Cook also feels that their so-called home field advantage is not an advantage at all, realistically, due to the intensity of the rivalry.

West Lincoln’s Jackson agreed that his Bears “statistically match up, to a degree.” What sets Loyd Star apart in stats, in Jackson’s opinion, are a few stand-out players.

“This is a game everybody gets hyped up for, so you never can tell,” said Jackson. “It’s a big rival game in our area. It’s a big deal for both of us. Whichever team wins is in, and whichever team loses is out.”

As far as the location factors in, Jackson said Loyd Star “obviously has home field advantage, but we just have to show up and play football.”

Both teams have senior players looking to make this last rivalry one to remember. “We have four seniors, and they want to win,” said Jackson.

Loyd Star has 12 seniors. “Their attitude hasn’t changed,” said Cook. “Our kids know that if we win Friday, we’ll keep playing. Our seniors have practiced, prepared and played as if every game this year has been their last. Because each was the last time they could play [each rival team]. Each week we’ve played like it’s our last week.”

Prior to the season start, Jackson said he felt like West Lincoln had been “snake-bitten” last year, but that the advantage of the injuries would be that new players had gotten valuable experience to bring into the 2016 season.

At this point in the year, Jackson said, “Those guys are playing hard and getting better, and it will help them Friday night. Julian Anderson at linebacker and others have stepped up, and some other players are developing.”

Assessing his team pre-season, Cook said Loyd Star had “an experience edge,” but they “need to have a desire to finish and push through tough challenges.” Looking back over the season, he said he feels like they failed at that. “We lost some close games where we needed to push through and didn’t. We’ve had some desire issues. We’ve had some kids who got complacent,” he said.

Both coaches said their teams are looking forward to Friday night’s head-to-head challenge. “It’s going to be a good game and our kids are really excited about it,” said West Lincoln’s Jackson. “Coach Adam Cook is a really good coach and they’ve got a good team. We’re looking forward to it.”

“We’ve got a tremendous amount of respect for West Lincoln and their staff,” said Cook. “We have got to play our best this Friday.”

Panthers can lock up playoff spot with win

File photo/Brookhaven’s Byrion Robinson (No. 14) has played well since taking over for the injured Sevante Quinn. The Panthers can... read more