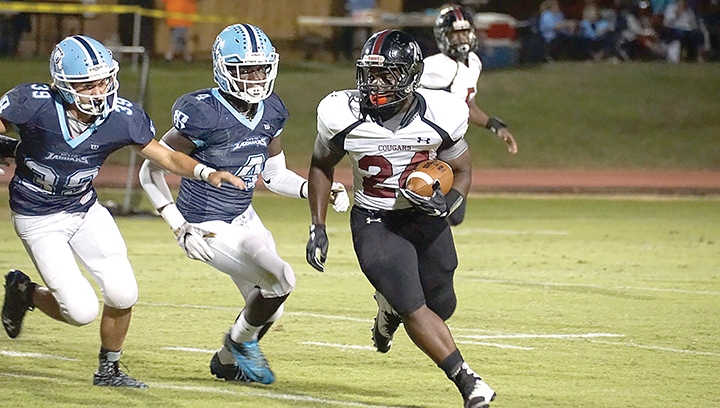 Photos by Jana Harp/Quitten Brown (above) will see plenty of action Friday again Florence since quarterback Charl’tez Nunnery (below) is injured.

The final regular season game for the Lawrence County Cougars is all going to be about speed and space.

“We need to get in space, and make them tackle us in space,” he said. “We’ve got to run the ball at them.”

Running the ball will be key if for no other reason than the absence of quarterback Charl’tez Nunnery, out with a dislocated elbow from an injury in last week’s victory against Richland.

“We will definitely have to run the ball efficiently,” said Palmer, “and use our defense to eliminate big plays from Florence.”

Running back Quitten Brown certainly isn’t quittin’. Though he missed the first six games of the season due to a torn ACL, Brown has made a big comeback, including scoring five touchdowns last week. Palmer noted, “We definitely look better with Quitten back in there.”

The main focus for the Lawrence County coaching staff has been for the team to improve week to week, getting better at “the little stuff.”

Palmer believes this season-long focus will pay off. “Hopefully, we’ll get to the playoffs, get hot, and see what happens,” he said.

The Cougars played well over the last couple of weeks, building their confidence as a team. 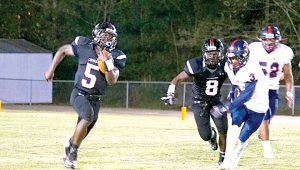 “Our offensive line improved a lot,” Palmer said, “and our defense is better. We started six sophomores, which was difficult, but they are playing faster and more physical now.”

If Lawrence County wins Friday’s game against Florence, the 4A Region 6 championship would be a three-way tie, and the Cougars would share the title with Florence and McComb, each with a 4-1 district record.

“This would be a big deal for us,” Palmer said, “because in the history of Lawrence County High School … Lawrence County has won three championships — 1999, 2005 and 2015. We want to be co-district champion.”

Although his team cannot be the single champion, if the Cougars win by seven or more points, they would be the No. 2 seed, and secure a home playoff game.

“This will big for us financially,” said Palmer, “and big for our kids.”

“I’m proud of our kids, I really am,” Palmer added. “They started out struggling, but have continued to work and have a good attitude, and I’m proud of the way they’re finishing.”

The Cougars face the Florence Eagles at Florence at 7 p.m. Friday.