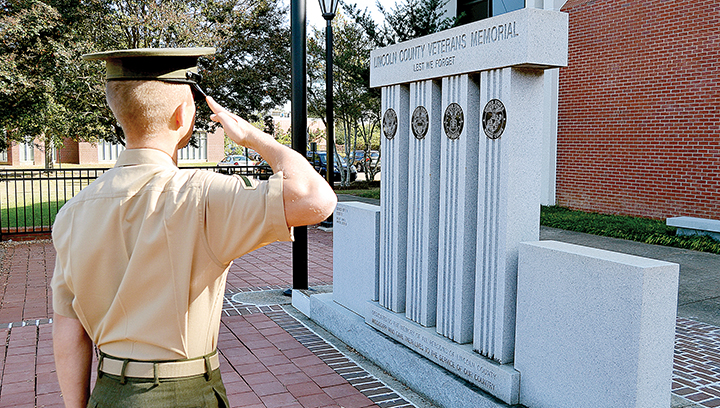 As the holiday set aside to honor veterans approaches, two local vets have a suggestion for families to recognize loved ones for their service in the armed forces.

It’s a common practice around the nation to memorialize local veterans with bricks engraved with their names, but until this summer Lincoln County did not have such a display.

Bricks can be purchased for $75.

Derrall Foster and Hervey Littlefield, who both served in the Vietnam War, met five years ago through an online veterans’ service and became fast friends. The two were familiar with several monuments in surrounding areas and wanted one for Lincoln County as a way for people to remember local veterans.

“They stood up for this country to give people the rights that they have,” Foster said. “They never questioned anything. Just remember our vets.”

Getting the approval for the bricks in the first place wasn’t easy. Littlefield said they got the ball rolling in 2012, but it took time to work out the details with the Lincoln County Board of Supervisors.

The plan was finalized in August 2014, but then the site needed some cleanup before the project could begin.

“We just really got going with it this past summer,” Littlefield said. “It’s painted and looks nice and we can use it for stuff. Now we have a place we can walk and we have a Memorial Day service there.”

Bricks can be purchased in memory or honor of any individual who served in the past or is currently serving in the armed forces. Veterans or their families must have proof of military service — typically a DD-214 form, which serves as a certificate of release or discharge from active duty.

For those still on active duty, their rank and discharge date will be left blank, and they can have their bricks updated at the end of their service.

Littlefield said there are about 2,000 veterans in Lincoln County, and there’s room for 1,800 named bricks. But there are only 230 bricks that have been placed since the project began, and the two have only 11 names that haven’t been processed yet. The pair receive about one to two applications a week.

Foster said economic troubles might be slowing down applications, and Littlefield attributes it to frustration when applications are made and the bricks aren’t placed. But there are a minimum number of bricks the two have to sell before they can be placed.

“The guy that does the sandblasting for us does 20 at a time,” he said. “We have to sell at least 20 before he even puts them in.”

While the VFW processes the checks for Foster and Littlefield, the engraved bricks are not an official VFW project. Applications for the bricks can be found at Brookhaven—Lincoln County Chamber of Commerce, Janie’s Pastry and at the front desk of the Lincoln County Chancery Clerk’s Office.

Seven individuals arrested on drug charges earlier this week at a Brookhaven hotel have been identified by authorities. Brookhaven Police... read more