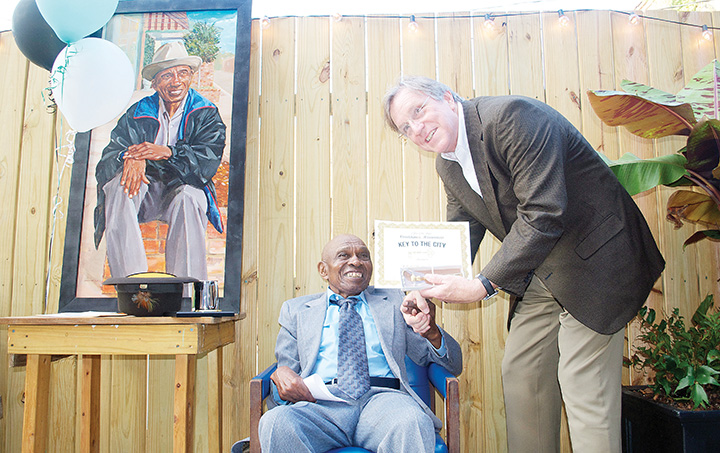 He’s known as a staple of the community.

Robert “Mr. Pete” Byrd was given the O Foundation’s VIP award Thursday in the patio behind Betty’s Eat Shop. He was recognized by Sen. Sally Doty, R-Brookhaven, and Mayor Joe Cox handed him his very own key to the city.

“Do you feel famous Pete?” O Foundation founder Rose Powell asked after all of the presentations were over.

Byrd has been a well-known member of the community for decades, and he can often be seen eating at Janie’s Pastry or at the Piggly Wiggly deli, usually with a bright smile on his face.

He’s lived on Minnesota Street since the 1960s, and for decades he worked for a tailor — despite his physical disability — until a heart attack left him unable to work.

According to his pastor, Rev. Larry Jointer of St. James Missionary Baptist Church, every day is a good day for Byrd, and he doesn’t complain unless someone is doing something wrong.

His work ethic, his easy smile and his concern for those around him have allowed Byrd to leave his mark on the community.

Retired Brookhaven Police Chief Pap Henderson recalled that Byrd was always watching out for the city — the residents of Minnesota Street especially.

“Pete still looks out for the whole street,” Henderson said. “Anything happens on Minnesota Street, Pete wanted it taken care of.”

Henderson described Byrd as a loving man whose concern extended throughout Brookhaven, and Byrd would always call on Henderson if there was a problem — but it wouldn’t be by phone.

“He would always tell someone to tell me to come and see him,” Henderson said. “He trusted that I was going to do something about his problem.”

Elisa Corley works as a correctional officer at the Lincoln County jail, and also organizes 5K events for the O Foundation’s principal program, the Race to Fitness. He moved to Brookhaven with his family from Chicago when he was 6 years old. Sitting in the back of his mom’s car, he’d hear her and other adults talking about Byrd.

Corley has been a good friend of Byrd’s for years now, but all he knew then was that his mom looked up to him.

Growing up, Corley noticed that Byrd was always working hard despite his physical disabilities. That inspired Corley to better himself — something he said Byrd has done for many in the community.

“A lot of people might not have come out and said it, but mentally they owe him a tribute for what he’s done for them, and they don’t know it,” Corley said.The O Foundation has been a service organization for 10 years, but last year it shifted its focus to fighting obesity in the community. Every year, the organization holds its main fundraiser by choosing one person to honor with a VIP award.

For their 10th anniversary, Corley said there was no better choice than Byrd.

Is Brookhaven ready to do the “Time Warp” for the first time? Organizers at the Brookhaven Little Theatre hope they... read more