Bobcats still searching for first win of the season 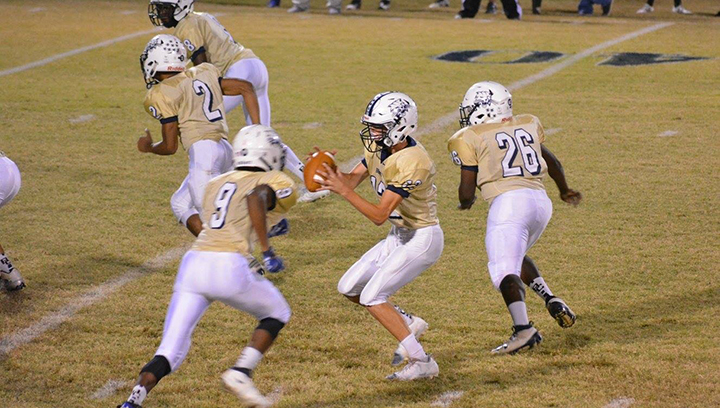 The Bogue Chitto Bobcats are still searching for their first win of the season after they were defeated 49-12 at home Friday by the Sacred Heart Crusaders in Region 4-1A play.

The young and inexperienced Bobcats held their own in the first quarter on Troy Smith Field. The offense did not generate any momentum, but the defense stood strong and only allowed seven points.

The Crusaders made a big push to get into the end zone, but the Bobcats were able to keep them out of it. But they finally gave up a score with five minutes to go in the first. Crusader William Agnew went into the end zone on a nine-yard run and the PAT was good.

The Bobcats ended the quarter with a punt that gave the Crusaders good field position to start the second quarter. By the end of the first, the Crusaders had a 7-0 lead over the Bobcats.

Both defenses came up with some turnovers to put their offenses in good field positions. Sacred Heart found the end zone first with Campbell Klein on a three-yard run. The Crusaders found the end zone again when Joseph Bishop got his 12-yard reception in the end zone. Klein completed a nine-yard run to paydirt.

The Bobcats finally got on the board at the 3:57 mark.

Dee Dillon had a 38-yard reception for a touchdown but failed at the two-point conversion attempt.

The Crusaders added another seven points when Agnew found the end zone again. He was able to go right up the middle of the Bobcats’ defense for 48 yards for the touchdown.

The Bobcats’ offense was driving until Layton Pitts ran back an interception for a touchdown.

The Bobcats finally got a few plays together to produce a positive outcome. Zach Upkins found the end zone on a 32-yard reception. The two-point conversion attempt failed.

At the end of the second quarter the Crusaders had a commanding 49-12 lead over the Bobcats.

In the second half both teams substituted with their underclassmen to give them some experience for next year. Both teams had impressive underclassmen who will help the teams in the future.

Defensively for the Bobcats, Darrius Porter led the team with six tackles and a fumble recovery.

Wesson gives up 80 in loss to Wilkinson

Photo by Tracey Fischer/Cobra quarterback Peyton Burns punches it in for the TD amidst a pile of players. The Wilkinson... read more