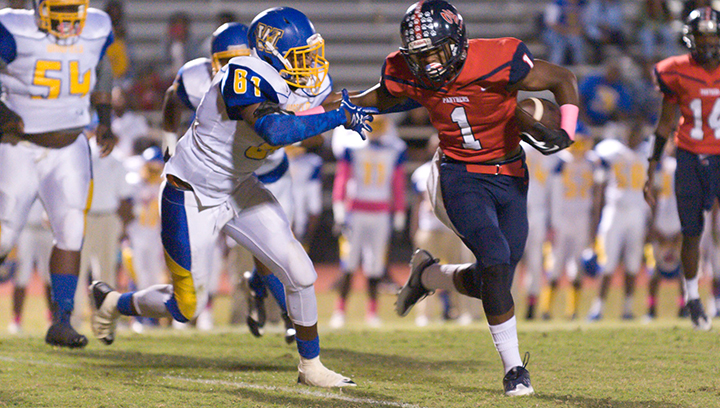 Photo by Teresa Allred/Ole Brook’s Damarrell Legget pushes past a Wingfield defender. The Panthers went on to vanquish the Falcons, securing a playoff berth.

The Brookhaven Panthers (7-3, 4-2) relied on a strong running game from Damarrell Legget to defeat Wingfield 45-24 Friday night and claim a spot in the Region 3-5A playoffs.

The Panthers relied on their ground game to pound out the win. They started the game with a 12-yard rushing touchdown by Legget, his first of five on the night.

With a mix of running and passing, the Falcons then marched down the field and La’andre Thomas connected with Savonta Johnson for a 10-yard touchdown. The Falcons elected to go for the two-point conversion but failed.

Later in the first quarter, as the Panthers were trying to gain extra yards on the ground, the Falcons stripped the ball and recovered the fumble on the 26-yard line. As time was expiring in the first, the Falcons connected on a 11-yard pass for a touchdown. Again, the Falcons elected to go for the two-point conversion and were unable to see it through. The Falcons took a slim 12-10 lead into the second quarter.

In the second quarter, Panther Byrion Robinson scored on a one-yard quarterback sneak. The Panthers took a 17-12 lead into halftime.

The Falcons started the third quarter with a muffed fielding of the kickoff, but retained possession of the ball. Despite having to punt out of their end zone on fourth down, the Falcons were able to get it off. Legget would later find the end zone on a 13-yard run, adding to the Panthers’ lead.

Behind the legs of Legget, the Panthers again moved down the field. He was able to bust free for a 20-yard gain. Legget, for the third time, reached paydirt on a 22-yard rush. Legget later scored his fourth touchdown of the night on a 11-yard rush.

With just over two minutes left in the third, Thomas scored for Wingfield on a 20-yard run. For the third time, the Falcons went for the two-point conversion and failed. The Panthers took a 38-18 lead into the final quarter.

On their next possession, Thomas tried to go long, but Panther Wesley Calcote intercepted the ball. Ole Brook, however, couldn’t capitalize and was forced to punt, pinning the Falcons on the five-yard line. Despite heavy pressure from the Brookhaven, Thomas connected with Henry Perry to advance the ball away from the goal line.

Deric  Butler managed to get to Thomas on their third down to force Wingfield into a fourth down.

Back-to-back penalties forced the Falcons to punt from their own nine-yard line. Following the punt, Legget scored his fifth touchdown of the night on a one-yard rush.

Facing a fourth and long, Thomas connected with Perry for a 35-yard touchdown for Wingfield.

The Falcons tried one more time for a two-point conversion but were unsuccessful.

Ole Brook forced the Falcons to fumble the ball on the nine-yard line to end the game.

Brookhaven will end regular season on the road as they head to Natchez to take on the Bulldogs Friday night. Kickoff is at 7 p.m.