Co-Lin rallies in the second half to defeat Pearl River 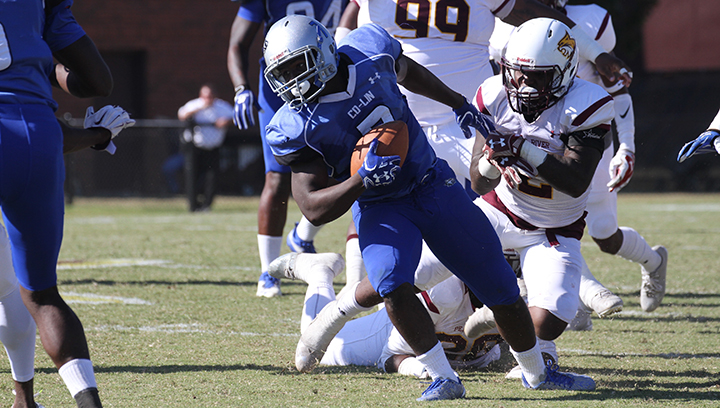 Photo by Lucas Calvert/Ladarius Galloway finished the afternoon with 170 yards and one score to lead the Wolves to a 31-17 victory.

POPLARVILLE – The Copiah-Lincoln Community College Wolves came out firing in the second half Saturday to defeat the Wildcats of Pearl River 31-17.

The Wildcats found the first points of the contest after a 68-yard drive was capped off by a Mark Johnson 23-yard field goal early in the first quarter.

Pearl River extended their lead to 10-0 after quarter Dominic DeLira was stripped on Co-Lin’s first play from scrimmage. The fumble was scooped up by PRCC’s Josh Neumann and returned 51-yards.

The Wolves narrowed the Wildcats’ lead late in the second quarter after Griffin Sublett split the uprights from 33-yards out. The field goal brought the score to 10-3 with 3:56 remaining in the first half.

Co-Lin received the ball to start the second half and marched 72-yards to tie the game at 10 all. A one-yard rush from sophomore Ladarius Galloway finished the drive.

With 8:31 remaining in the third quarter, the Wolves were facing a fourth and short. DeLira found Montez Sweat, who normally plays a defensive role, for a 34-yard touchdown toss and catch. The reception was Sweat’s first reception on the season, and gave Co-Lin a 17-10 lead.

On the Wolves’ next possession DeLira found the endzone again. Jaylen Smith made the nine-yard reception to give the Wolves a 24-10 lead with 1:27 remaining in the third quarter.

PRCC finally responded in the fourth quarter with 79-yard drive capped off by a 19-yard pass from Timothy Arnold to Jay Banks. The score cut Co-Lin’s lead to just seven with 9:12 remaining in the contest.

DeLira put the game out of reach for the Wildcats late in the fourth with yet another touchdown pass. Alexander Hollins snagged the four-yard strike and capped off 68-yard drive. The score was the final of the game and put the Wolves up 31-17.

DeLira played a fantastic second half as he threw for three touchdowns. The Austin, Texas, native finished the afternoon 17-for-24 with 153 yards. Datrin Guyton led the Wolves receiving corps with five receptions for 47 yards. Alexander Hollins finished the game with three receptions for 30 yards and one touchdown. Ladarius Galloway carried the ball 26 for the Wolves and racked up 170 yards and one score on the afternoon. The Wolves finished the contest with 307 yards of total offense.

Timothy Arnold finished the day 11-for-21 for 100 yards with one interception for PRCC.

Matthew Eaton led the PRCC receivers with six receptions for 56-yards. Darious Leggot led the Wildcat’s on the rushing attack with 27 touches for 115 yards.