Eagles soar over the Cougars in division 7-4A showdown 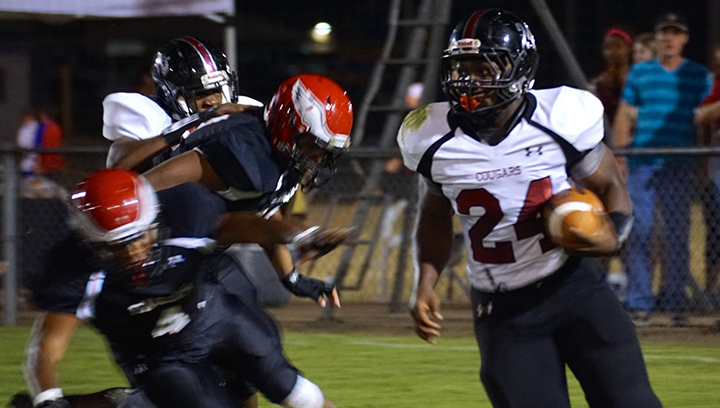 FLORENCE — The Florence Eagles wrapped up the Division 7-4A football championship with a 17-6 win over Lawrence County Friday night.

Lawrence County, powered almost exclusively by the running of Quitten Brown, held a 6-0 lead for most of the night. Florence scored the final 17 points of the game, however, to secure a perfect 5-0 mark in division play.

A 90-yard interception return by junior Jaelon Davis was the biggest play of the game. With Lawrence County leading 6-0 and driving toward potential score midway through the third quarter, Davis stepped in front of a Kemarcus Brown pass and outraced Cougar pursuers to the opposite end zone.

Florence had enjoyed very little offensive success before that game-changing moment. The Eagles largely dominated after that.

With the win, Florence, coached by Steve Pruett, improved to 9-2 overall and, as a number-one seed, earned the right to play at home in the first round of the 4A playoffs. The Eagles will host Northeast Jones. Lawrence County, under coach Jaymie Palmer, finished the regular season at 4-7 overall, and 3-2 in the division.  The Cougars finished third, and will travel to Quitman Friday.

“Our team played hard,” said Palmer. “Until that big play, the game had gone our way – the type of game we needed, to have our best chance. Let’s give credit to Coach Pruitt and his team. They did a good job.” 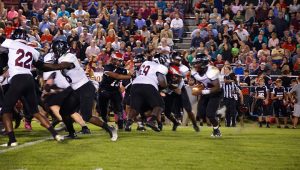 Cougar running back Antwan Pittman (34) attempts to get clear of the Eagle blitz.

Palmer and his Cougars were without senior quarterback Charl’Tez Nunnery, who dislocated his right elbow one week earlier. With Nunnery out of the picture, and the LCHS offense somewhat limited, Florence made every effort to stop the Cougars’ running game. The Eagles were fairly successful. Despite giving up a whopping 251 yards to Lawrence County standout Brown, Florence was able to keep Lawrence County out of the end all but once.

Brown’s big night started almost immediately. On Lawrence County’s third offensive play, he broke loose for 78 yards. He was chased down, however, at the Florence 17-yard line, and the Cougars ended up missing a 34-yard field goal attempt.

Lawrence County did crack the goal line on its second possession, driving 59 yards in eight plays, with Brown scoring on an eight-yard run. A 27-yard run by quarterback Kemarcus Brown set up the score. The Cougars, who needed to beat Florence by seven points to grab second place in the division, missed the extra points. It was 6-0.

Florence entered the game averaging 37 points per game, but the LCHS defense thwarted the Eagles’ attack almost entirely in the first half, forcing punts on all five Florence possessions. It was 6-0 at the half.

Early in the second half, after a Brandon Bullock pass interception, the Cougars appeared poised to add to their lead. A 43-yard run by Quitten Brown got the Cougars deep into Florence territory.  It was at that point, however, that Florence’s Davis broke the hearts of the Cougar faithful. Davis grabbed a Kemarcus Brown pass at his own 10-yard line, eluded a couple of potential tacklers, and tip-toed down the Lawrence County sideline on the way to his 90-yard touchdown return. Kicker Chasten Lamb gave the Eagles a 7-6 lead.

Lawrence County had mostly controlled up to that point, but Florence dominated afterward. LCHS would pick up just two more first downs after Florence took the lead. Early in the fourth quarter, Lamb kicked a 37-yard field goal to extend Florence’s lead to 10-6.

Late in the game, Florence capped the win by pounding out a 10-play, 72-yard scoring drive. Degerrick Lee did most of the damage, completing the drive with a three-yard touchdown run. For the night, Lee rushed 27 times for 123 yards. Quarterback Brad Dennis had 58 yards on 11 carries.

Quitten Brown ran 30 times en route to his 251-yard night. Kemarcus Brown had 37 yards on seven carries. Unofficially, the Cougar defense was led by linebackers Brandon Bullock and Azar Myles, who were each in on 15 tackles. Bullock and Ahmad Brown both had pass interceptions.

Bobcats still searching for first win of the season