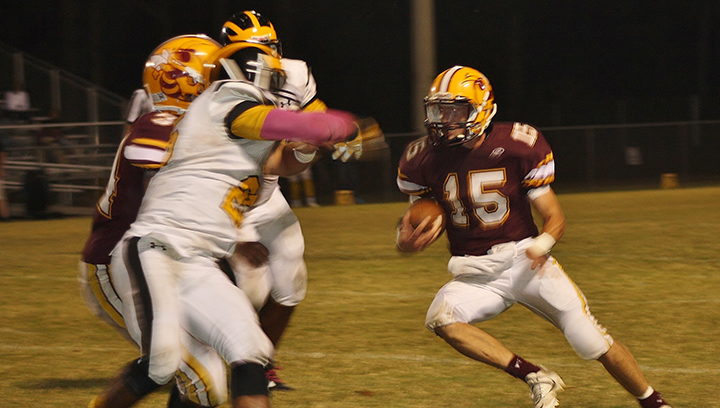 Photo by Christy Boyte/Zach Hodges for the Yellow Jackets (15) attempts to dodge a Trojan defender in Friday’s game.

The Amite County Trojans marched over the Enterprise Yellow Jackets in a 46-21 win at Harry Cole Field Friday.

It looked like the Jackets were going to start off with the upper hand when Colby Beard booted an on-side kick that was recovered by Devon Kirtfield, giving them the ball. However, the Trojans stripped the ball and began making their way downfield. After a few short pass completions at the hands of the Trojans’ quarterback Trevarious Clark, Bobby Woodard took the ball into the end zone. Lantravious Franklin punched in the two-point conversion putting the Trojans in the lead early in the district game.

Enterprise got into the red zone but was unable to score. After turning it over on downs, the Trojans regained control and took the ball back into the end zone again with a pass play to D’Kenyace Roberts.

Early in the second quarter, Jacket running back Darren Richardson broke loose, putting his team on the board.

However, Amite County could not be contained and they scored again.

Enterprise found itself in the red zone again but still could not capitalize.

The Jackets went for the field goal, but Toby White’s kick was blocked by Amite County. The Trojans picked up the ball and ran it back for the last touchdown of the first half, leaving the Jackets trailing 38-7.

The second half proved to be a battle in the trenches as each team fought hard to contain the other. However, Enterprise made a comeback in the latter part of the game.

Senior quarterback Zach Hodges completed a long pass to Tanner Waldrop, who took the ball in for a 46-yard touchdown.

To end his final night on the field, Hodges broke loose for a 50-yard run to the end zone with senior kicker Toby White tacking on the extra point.

Waldrop led the Jackets in rushing yards with 127 yards for the night. Hodges was close behind with 111 yards. Marvin Butler helped out the Jackets with 52 yards on kickoff returns and 38 yards rushing. Enterprise ended the night with a total of 361 yards rushing.

On defense, seniors Austin Boyte and Tristan Cantrell dominated both with six tackles each. Drake Allen was right behind them with five tackles for the night.

Amite County coach, Sedric Cain, said he was very proud of his team’s performance. After having an up and down season, he feels like they have finally found their groove and are looking forward to the playoffs.

Enterprise coach Brooks Burns also expressed how proud he was of his team’s effort on the field.

He said his team did a better job possessing the ball on offense and played very physical. However, he admits that they did give up some big plays and had a hard time completing long drives.

It was senior night for the Jackets as they started off the night celebrating the many senior football players and cheerleaders who will graduate this year.

Enterprise ended the season at 3-7.

The Amite County Trojans finished their season at 5-5 and will continue into the district playoffs.

Hearing set for murder suspect; City, county have seen 11 murders from Jan. 1, 2015 to the present

A suspect in the first homicide of the year will go before a municipal court judge Tuesday for a bond... read more