Wesson gives up 80 in loss to Wilkinson 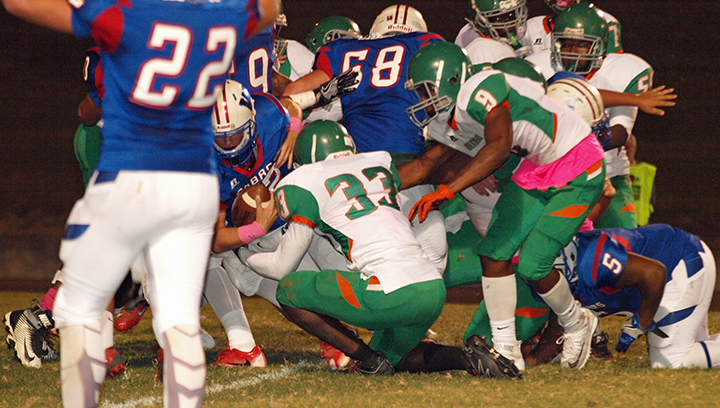 Photo by Tracey Fischer/Cobra quarterback Peyton Burns punches it in for the TD amidst a pile of players.

The Wilkinson County Wildcats put 80 points on the board in an easy win over Wesson  Friday night.

The Wildcats scored on every possession except one to take the game at Wesson.

The Cobras started the game strong with Damien Smith returning the kickoff about 80 yards for a touchdown in the first 15 seconds of the game.  The extra point was blocked but the Cobras put six points on the board.

Wesson’s kicker, Joseph Carraway, went for the on-side kick which was recovered by Cobra Will Hulon.

The Wildcats scratched back with an interception by Travion Jones, putting them in control of the ball.  They worked the ball to the red zone with carries by Terrell Coleman, Terry Mealey and TreShaud Smith, with Smith running the ball in for the touchdown from the nine-yard line.  Mealey completed a pass in the end zone for the two-point conversion.

The Cobras came back on the next play with rushes by Peyton Burns, Jaquavion Harris, Dale Thigpen, and Jeremiah Barlow and a 26-yard pass from Burns to Will Hulon to get four first downs.  Quarterback Peyton Burns snuck the ball into the end zone from the one-yard line and then completed a pass to Barlow to add eight more points to their score.

The Wildcats then scored with Smith running in a touchdown after five first downs and getting the two-point conversion.  The  quarter ended with the Cobras punting on fourth down with a bad snap that had the Wildcats taking over on the Cobras’ four-yard line. The score was 14-16 with the Wildcats in the lead.

After the bad snap, the Wildcats were in the red zone and Coleman ran the ball in for the touchdown and Mealey completed the two point conversion.

The Cobras came back with Dale Thigpen returning the kickoff about 80 yards for a touchdown.  The two-point conversion was unsuccessful and the Wildcats took over.

Wilkinson’s Coleman scored a touchdown and quarterback Smith snuck the two-point conversion into the end zone.

The Cobras punted on their next possession and the Wildcats moved the ball down the field with completed passes so Mealey could run in the touchdown again.  Juan Anthony completed a pass for the two-point conversion.

The Cobras retaliated with a trick play when quarterback Burns passed to Thigpen who then passed to Hulon to gain about 45 yards.

Jeremiah Barlow had a couple of successful rushes and then carried the ball to the goal for a touchdown.

Matthew Craft kicked the extra point to add seven points for the Cobras.

Wildcat Coleman scored on Wilkinson’s next possession after rushing the ball about 65 yards.

The Cobras tried to end the first half with a successful run with Burns completing seven passes to Victavion Edwards, Brian Thomas and Will Hulon to get inside the Wildcats’ red zone but Wildcat Kevoisier Franklin intercepted a pass and ran the ball for a touchdown.

The first half ended with a score of 54-27 with the Wildcats in the lead.

Both teams battled in the third quarter 13 points each.

In the fourth, the Wildcats didn’t slack up and continued their drive to get two more touchdowns.

Wilkinson’s TreShaud Smith ran in a touchdown after Travion Jones intercepted a pass.  Kelandrix Lushaw also made a touchdown for the Wildcats from around the 20-yard line.

Wesson finished the game with Trey Glasper rushing the ball and Will Hulon completing passes from Burns to eat yardage to get to the 11-yard line.

Burns finished the game with a touchdown pass to Will Hulon and Matthew Craft kicked the extra point to end with a final score of 80-47.

Co-Lin rallies in the second half to defeat Pearl River

Photo by Lucas Calvert/Ladarius Galloway finished the afternoon with 170 yards and one score to lead the Wolves to a... read more