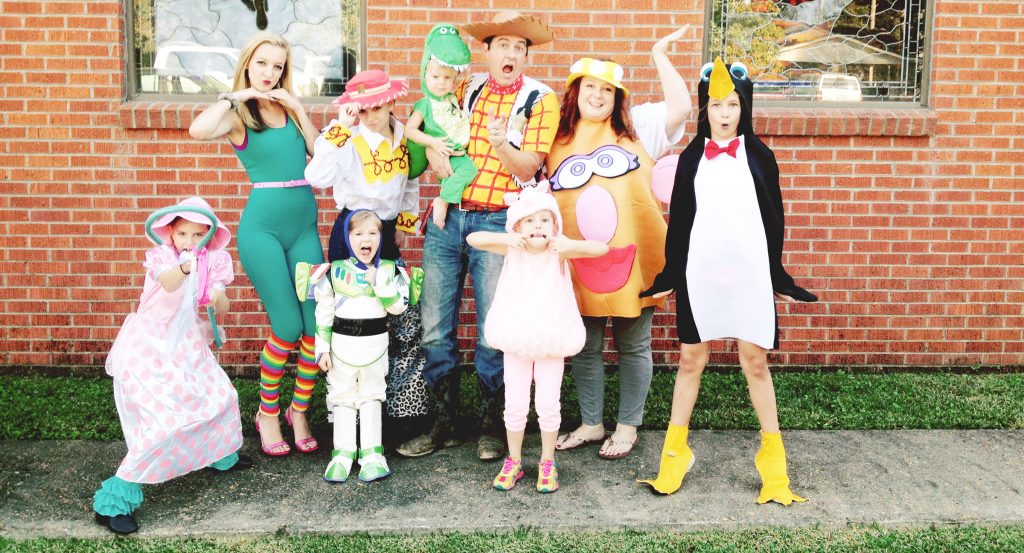 It all started with a little boy who wanted to be an astronaut.

Buzz Lightyear to be exact.

And one thing Andrea Balkcom loves is to see her babies happy — all seven of them.

So Balkcom, who admits her age is somewhere below 60, found a green and white Toy Story costume on eBay for 4-year-old Isaac. “I found the world’s greatest Buzz costume for just pennies,” she said.

She started surfing the web to make their favorite family movie come to life for their church’s annual community fall festival that was held Sunday night.

Madeline, the oldest at 16, became Workout Barbie in a turquoise metallic unitard. Sarah Elizabeth, 14, was Jessie, while Katherine, 10, was Wheezy the penguin and Hannah Elaine, 8, was a Bo Peep with no sheep. Victoria, the fifth girl and 5-years-old, was Hamm.

Then there’s the aforementioned Luke, who is the first boy and a huge fan of Buzz, obviously.

“He’s the one who made Mom think of the idea,” Hannah Elaine said. “He wanted to be Buzz so badly.”

Finally, the baby of the bunch, 2-year-old Luke, wore a T-Rex costume for as long as his parents and siblings could keep him in it.

Balkcom chose the Mrs. Potato Head costume for herself because it was comfy. Her husband, Rich, was almost  Mr. Potato Head, but came as Sheriff Woody instead and got to say cool things like “There’s a snake in my boot” and “Reach for the sky.”

Rich is the Rev. Richard Balkcom, pastor of Southway Baptist Church on South Jackson Street where the fall festival was held. He’s been pastor there for 10 years and was the youth minister for nearly four before that.

Dressing up her family for the church festival is a tradition that started last year that she plans to continue as long as her brood cooperates.

A year ago, the pastor was a cell phone and his wife and children were social media and other popular apps. Balkcom painted the logos on brightly colored T-shirts — Twitter, Facebook, Netflix, Instagram and the like.

She doesn’t know what they’ll be next year. It’s hard to plan that far ahead, she said.

In fact, it’s hard to plan dinner even, when she’s up at 4 a.m. with Luke, the early riser, and mentally attacking her “To Do” list for the day.

This wasn’t Balkcom’s plan when she married the dashing young man she’d met at the retail store they both worked at while attending college in Atlanta 18 years ago.

She planned to graduate and work in the dental field. She never expected she’d be a pastor’s wife.

“I married an outdoor education major,” she said.

The two did a lot of community service work with troubled teens. “We’ve both got a heart for ministering to people,” she said.

The mother of seven figured they’d work in the social field and instead of having children of their own, they’d take in foster children who needed parents.

“I wanted to be surrounded by people,” she said.

She laughs at that now.

Balkcom got pregnant while her husband was enrolled at the New Orleans Baptist Theological Seminary. Madeline was 2 and Sarah Elizabeth was just a baby when they moved to Brookhaven so Rev. Balkcom could start as the youth minister at Southway.

Then came Katherine and Hannah Elaine almost back to back.

She found out she was pregnant with Victoria during a routine doctor’s visit. She was five months along and was in shock at the news. She had a sonogram during the visit and texted her husband, who had not been advised yet of the new development: “It’s a girl.”

The older girls named Victoria. They were studying their Roman numerals and picked V for five because she was the fifth girl.

Balkcom had a feeling they were done making babies.

She was still nursing Victoria when she went back to her doctor for a post-op checkup and found out she was pregnant again.

She assumed it would be a girl so she went for the sonogram alone while her husband took their older two to lunch.

She texted him when she saw the screen: “I should have let you come. It’s a boy.”

They moved into a five-bedroom, four-bath house on South Jackson they’d bought in a foreclosure. It’s not quite a half mile from the church.

“We had to rebuild and redo everything,” she said.

She was a dynamo, sanding staircases, stripping floors, installing a sink, even lifting a stove. She had tons of energy and was feeling good.

Madeline and Sarah Elizabeth told her she was pregnant.

She scoffed at their assumption because she always feels horrible when she’s pregnant, but she picked up a pregnancy test while she was at the store to prove them wrong.

She took the test when she got home. “Here. I told you so,” she said, tossing it at them without looking at it.

They laughed when they saw she was the one wrong.

That’s how they found out about baby Luke, said the woman who has never had an epidural or a C-section.

She’d given all the baby stuff away after child number 4 and then again after 5 and 6. “Each time I was convinced I wouldn’t need it again,” she said.

With seven children, there are times when Balkcom wonders how she’s going to get everything done.

She gets her strength from God, scripture and her husband.

A typical weekday for the Balkcoms starts with breakfast, their biggest meal of the day.

Their one meal’s menu reads like a grocery list for most families: a dozen eggs, a pound of bacon, a loaf of bread, a box of cereal.

“The Middles,” as she calls them, like to cook with Mommy.

“I have lots of little helpers,” she said.

Rev. Balkcom usually grabs his breakfast on the go as he heads out to either his church office, or to one of the schools. He’s a contract counselor for both Lincoln County and Brookhaven school districts.

“If we see him, we’re more likely to see him in the morning,” she said.

Then it’s chores like cleaning up after breakfast and sweeping for the first of three times in a day. Laundry gets started — it’s usually three to five loads a day.

They have devotion before Balkcom starts preschool with “The Littles.”

The Balkcoms started homeschooling their children when Madeline, who was in third grade at Mamie Martin Elementary, asked if she could stay home for school.

Sarah Elizabeth and Katherine followed suit and now it’s just the thing that they do.

“The Littles” have free time while she does school work with “The Middles.” “The Olders” go upstairs where it’s quiet to do their school work.

Lunch is sandwiches or whatever is quick and easy, then naps for those who need them — except for Mom.

The afternoon is spent finishing school work and running errands, plus chauffeuring girls to cheer, art and dance. They’ve got ballet lessons in Jackson to get to twice a week.

She tries to cook dinner three times a week, sometimes four. Leftovers are a certainty in the Balkcom house.

They do dinner in shifts. “Feed them, bathe them, get them to bed,” she said. She starts with the youngest and works her way up until she gets to the ones who don’t need her help.

Dad tells bedtime stories to whoever wants to listen.

Thursday nights are date night when she gets to spend quality time with her husband. “There’s a lot of days that go by and we’ll get a good morning and a good night,” she said.

In addition to her husband, Balkom relies on scripture to get her through each day. “It’s concrete,” she said. “I know it’s not going to change.”

She also uses essential oils in place of pharmaceuticals to help with some breathing issues she’s learned to cope with. She escapes to a movie alone sometimes and enjoys scrapbooking, painting and Bible journaling.

And then there’s coffee. “I drink a lot of coffee,” she said, holding a travel cup while she spoke.

Balkcom expects the stares and personal questions. “You know how that happens, right?” and “Are these all yours?” are two of the most frequent.

“If I haven’t heard that a zillion times,” she said.

Balkcom doesn’t know if there will be an eighth. She’s leaving that up to God.

This isn’t the life she envisioned but she can’t imagine it any other way.

“I think that with every child we’ve added I’ve felt like it was impossible and then when the baby gets here I can’t imagine life without that child,” she said.

Murder included in round of indictments

Second-degree murder and touching a child for lustful purposes are among the indictments served recently following a Lincoln County grand... read more