Suspect in Hwy. 84 stabbing turns himself in

A Wesson man accused of stabbing another individual outside the Army National Guard building on Hwy. 84 over the weekend turned himself in to police Tuesday, authorities said. 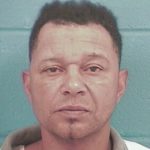 The 24-year-old male victim was stabbed in the neck shortly before midnight Saturday, according to Brookhaven Chief of Police Bobby Bell.

“From my understanding, there were a couple of altercations that took place before this, but they’re not saying what it was about,” Bell said Monday.