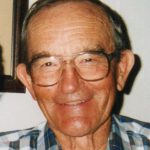 Johnson-Overturf Funeral Home in Interlachen, Florida, is in charge of arrangements.

Mr. Allen, 96, died Monday, Oct. 31, 2016, at Haven Hospice Roberts Care Center of natural causes. He was born in Bogue Chitto. He graduated from Enterprise High School and attended Copiah-Lincoln Junior College until the outbreak of World War II. He settled in Putnam County with his family in 1963, after many moves for the U.S. Air Force. An Air Force veteran of World War II and Korea, Bernie retired from the Air Force as a lieutenant colonel after 21 years of service.  While serving in England during WWII, he flew 59 combat missions from Fowlmere in the P51 Mustang. After WWII, he was part of The Army of Occupation in Japan from 1946 to 1948 stationed at Ashiya Airfield. Lt Col Allen was a recipient of the Bronze Star and Air Medal.

Following his retirement from the Air Force, he worked 10 years as a computer operator at the University of Florida.

In retirement, Lt. Col. was an avid gardener and member of the American Camellia Society.  He was well known in the West Putnam area for the camellias he grew and shared with others.  He was also an avid outdoorsman enjoying, bird hunting, all kinds of fishing, and birding in his leisure time.

He and Lorraine put a lot of miles on their motorhome traveling the country birding and fishing.

He was the fire chief for the Interlachen Volunteer Fire Department for 12 years bringing the first Jaws of Life to the department. He had attended St. Andrews Episcopal Church in Interlachen.

Preceding him in death was his wife of 69 years, Lorraine G. Allen.

In lieu of flowers, the family requests memorial donations be sent to Rodeheaver Boys  Ranch, 380 Boys Ranch Road, Palatka, FL  32177.   Memories and condolences may be expressed to the family at Bernie’s Book of Memories page at www.JohnsonOverturffunerals.com.

Johnson-Overturf Funeral Home in Interlachen, Florida, is in charge of the arrangements.