Dentist ‘buys’ back Halloween candy to send to troops overseas 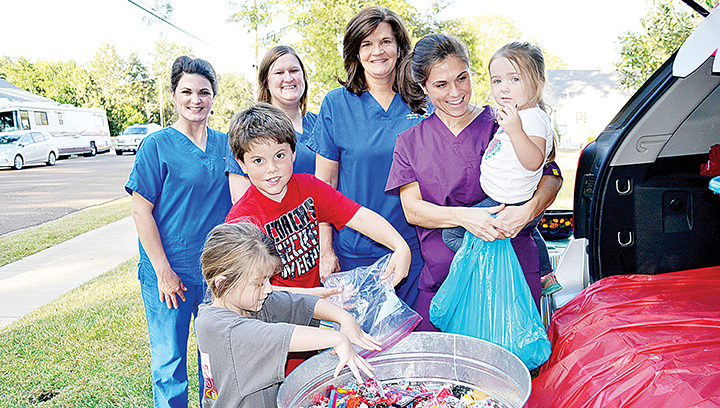 Photo by Donna Campbell/The staff of Ole Brook Pediatric Dentistry collected candy from trick-or-treaters the day after Halloween to send to troops overseas. Tossing some candy into the bucket are Charlotte Kilpatrick, 4, (left), and her brother, Elijah Kilpatrick, 8, who are surrounded by Brandi Leger, Michelle Nolan, Denise Thames and Dr. Joey Sessums, holding 3-year-old Cora Fuselier.

Every Halloween, a Brookhaven dentist tries to collect all the candy she can.

But Joey Sessums doesn’t have a sweet tooth. She has a sweet heart.

For the third year, Sessums and her staff at Ole Brook Pediatric Dentistry collected bag after bag of leftover Halloween candy, which the dentist ships to Operation Gratitude in California. Then they ship the goodies to troops overseas.

Sessums pays for the shipping to California for the treats herself, but it’s worth it knowing the military personnel who get it will be smiling.

Sessums and her staff bargain with their tiny patients and anyone else who wants to donate. They collect the candy the day after Halloween and in return, the trick-or-treater gets a coupon for a free Blizzard, courtesy of the Brookhaven Dairy Queen.

And for every pound donated — up to five pounds — the child gets an entry in the jar for a new bike.

Sessums and her staff Tuesday set up a table outside after they closed the office at 3 p.m. They brought out a jar for the bike entries, a giant metal tub for the candy and the all important scale for weighing the treats.

A separate table held paper and crayons for children to draw pictures to ship with the candy.

Cora Fuselier, 3, drew some hearts and with Sessums’ help, signed her name.

Cora brought two pounds of candy to give to the troops.

“We don’t need it in the house,” said her mother, Nancy Fuselier.

She explained to her daughter why they should give the dentist their leftover candy and Cora was happy to oblige.

“We’re giving it to people who are fighting for our freedom,” she said.

Sixth-graders at West Lincoln Attendance Center sent cards and candy to the office for the troops. Sessums said the students donated about 100 pounds of candy and a manila envelope stuffed with drawings.

Sessums expected to collect at least another 100 pounds from the post-Halloween trick-or-treaters.

She said besides helping bring joy to the troops, she has an ulterior motive as a dentist. “What we’re trying to do is get the candy out of the kids’ hands,” she said.

The candy buy-back is not only good for their teeth, but it teaches them the importance of giving, she said.

Tardy Wesson tenants may no longer get free water

Wesson soon may see changes to the way water bills are sent out for homes with multiple tenants. It’s not... read more