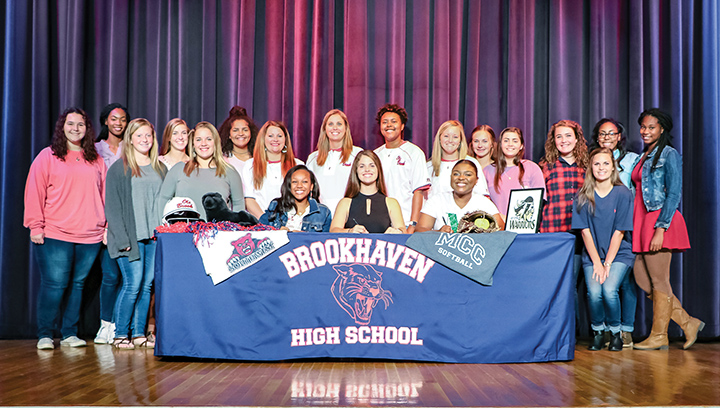 Submitted photo/Tia Bussey, Jada Henderson and Macy Ziskin signed letters of intent to play softball at the community college level Tuesday. They are surrounded by teammates and coaches at the signing ceremony.

“We are extremely proud of these young ladies. They have each put in the work it takes to get to the next level. We are excited to see what the future holds for them at the junior college level,” coach Mandy Vinson said.

Bussey committed to Southwest Mississippi Community College during the summer and made it official on Tuesday. Bussey plays centerfield for the Lady Panthers and is the lead off slapper. Last season, she recorded a .442 batting average with two doubles and four triples. Bussey stole 24 bases last season.

When asked about her college choice, she said, “I chose Southwest because it has a beautiful facility. I think I will have a chance to better my softball skills at Southwest with Coach Johnson and Coach Slaton. Both coaches were very welcoming and made me feel like part of the team from the beginning of the process.”

“Tia is a fun player to watch.  She is able to make big plays in the outfield. Tia is like a sponge when it comes to softball,” Vinson said. “She is always willing to soak up any knowledge about her position that she can. We are looking forward to watching her play at Southwest.”

As of now, Bussey hopes to pursue a degree in veterinary medicine.

After graduation, Henderson will move to Meridian Community College to continue her education and softball career. Henderson is a standout outfielder for the Lady Panthers. She had an on-base percentage of .286 in the 2016 season. She hit one triple and two homeruns.

“The past six years at Brookhaven haven’t been easy, but I’ve learned to accept the things I can’t change and it’s made me love the game of softball even more,” she said. “I will really miss the coaches and team next year, but I am excited to see what God has in store for me at Meridian. I chose Meridian because it felt right to me.”

“Jada is a player that plays with a lot of emotion. She shows the determination to get better in every aspect of her game. She is a very hard worker. I know Jada will excel at Meridian. I think it is a great place for her to continue her career,” Vinson said.

Henderson plans to continue her dream of a degree in mortuary science at Meridian.

Ziskin will complete her second year as a Lady Panther this upcoming spring season. She transferred to Brookhaven her junior year of high school. She finished the 2016 season with a batting average of .312. Ziskin plays shortstop for the Lady Panthers.

She signed a letter of intent to play softball for the East Central Lady Warriors next year.

“East Central felt like home to me the second I walked on campus. I had this feeling that ECCC was where God wanted me to be. Being a Lady Panther has been more to me than putting on a jersey and playing a ball game.  It has given me another family to grow with everyday on the ball field and in life,” she said.

“Macy will do extremely well at East Central. She is a gritty player and loves the game of softball,” said Vinson.

Ziskin plans to continue her path towards a career in dentistry at East Central. 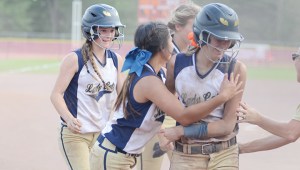 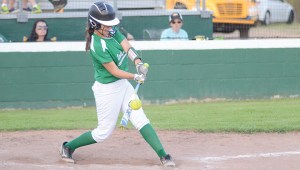