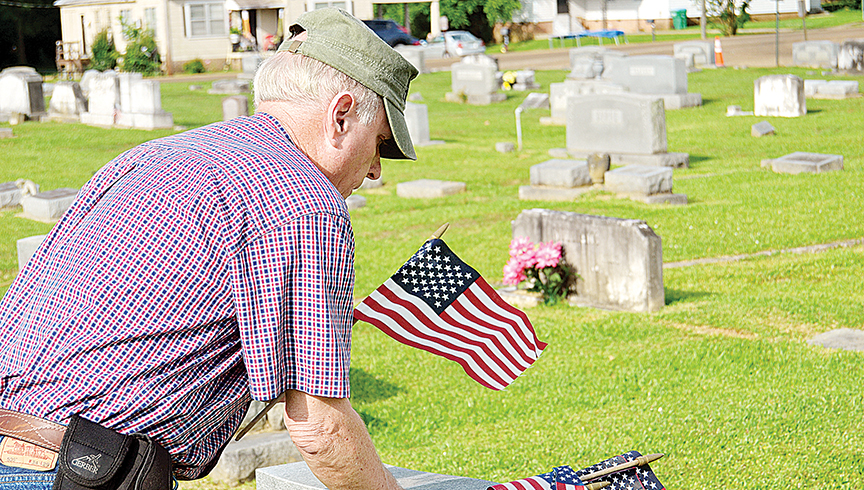 Photo by Donna Campbell/American Legion Post Commander Keith Reeves places American flags at Rosehill Cemetery earlier this year. Volunteers are needed Saturday at 8:30 a.m. at the Rosehill, East Haven, Carver Heights and Hillcrest cemeteries to mark the graves of deceased veterans as a Veterans Day tribute. Volunteers will also be needed the following Saturday at the cemeteries to pick up the flags.

It’s a longstanding tradition and one that could be in danger of fading away in the years to come.

Every year, the American Legion works to place American flags on the graves of veterans for the week leading up to Veterans Day and Memorial Day. The legion plans to put up flags at Rosehill, East Haven, Carver Heights and Hillcrest cemeteries Saturday starting at 8:30 a.m., and they will be taken down the following Saturday, the day after Veterans Day.

“This is a good project,” Post Commander Keith Reeves said. “It shows respect for your country and veterans — the ones that have served.”

But it’s a project that requires manpower, and it’s getting more difficult to find it. There are about 10 members of American Legion Post 12 actively attending meetings, and for some years those 10 members are the only ones putting out flags.

It’s not easy or short work. Including some of the local county churches, about 3,000 flags will be put out Saturday. But extra hands can make the work go by much faster and be much less of a burden to the veterans of American Legion Post 12. Reeves recounted a conversation he had with Daily Leader editor Donna Campbell in an interview before Memorial Day.

“She was telling me she had come from the Coast,” he said. “She said it doesn’t take but about 20 minutes to do a cemetery on the Coast because so many people come out and want to help. I thought, ‘My goodness, maybe someday we’d be able to have that many people.’”

It may not be easy work, but Reeves said he does it to honor his fellow veterans.

“It’s important to honor them because they have served — sometimes in times of war — and they’ve fulfilled their obligation to their country, so we might enjoy the lifestyle that we’re living today,” he said.

The American Legion is open to anyone who served in the armed forces and who was honorably discharged. Reeves served in the Army Reserve from 1969-1975, and he said it’s been a lot of fun serving as the post’s commander.

“It’s very educational to listen to some of these old soldiers tell their stories,” he said. “You can learn a lot from them.”

Reeves said the American Legion is always looking for new members — which will become increasingly important for the organization as time passes.

“When we play out, that’s going to wind it up unless somebody picks up the slack,” he said.

Individuals interested in volunteering for the flag service or joining the organization can call Reeves at 601-835-8173. Reeves said individuals can also contact any American Legion member or stop by for one of their meetings held every second Thursday at 4 p.m. at the Jimmy Furlow Senior Center.

A Crystal Springs man died this morning after his car crashed into trees on the side of I-55 near Wesson, authorities said.... read more