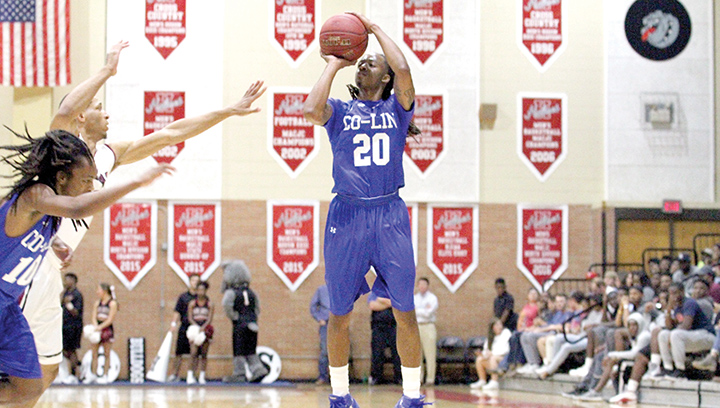 Photo by Natalie Davis/Lamarcus Lee finished the game with 13 points and five rebounds for the Wolves Tuesday.

The Copiah-Lincoln Community College Wolves started their season with a strong showing against the Bulldogs of Holmes Tuesday. The Wolves left the hostile Frank Branch Coliseum with a 74-68 victory.

The Wolves (1-0) take the floor Thursday as they host Mississippi Delta in Mullen Gymnasium.

Co-Lin asks that all Purple Heart or veterans attend the game to be recognized between the games.

“I’m proud of our guys tonight,” said head coach Kenny Bizot. “We gave up a pretty big lead tonight at one point, but we didn’t do it on the defensive end. We just made some turnovers and took some bad shots, overall I’m really happy for these young guys.”

The Wolves built a solid lead late in the first half going up by as many as six points in the final two minutes of play. The Wolves were active in all facets of the game with players scoring in a variety of ways and hustling down the floor on the defensive end of the court.

Co-Lin really found nice rhythm in the second half with the three-point shot and extended the lead to 14 with just 5:46 remaining in the contest.

After some poor decisions offensively for the Wolves, Holmes cut the lead to just four in the final minute of play. The young Wolves overcame the late adversity and escaped the opening game with a victory.

Vincent Phillips led the Wolves in scoring with 28 points, five assists, and five the rebounds. The freshman was 6-for-14 from beyond the arc. Lamarcus Lee finished the game with 13 points and five rebounds for the Wolves. Youry White led Co-Lin on the boards with six rebounds and netted six points.

Mikkel Norment posted 17 points for the Bulldogs, while Trevais Spencer added another 12. Demarkis Weatherall and Justin Johnson led Holmes in rebounds with eight apiece in the contest.

Watch Thursday’s action live at colinathletics.com or listen at WMJU 104.3 FM in Brookhaven.

“We should have had the game in hand at the end of regulation, but we let a big lead get away from us,” said head coach Gwyn Young. “We shot pretty poorly to start the game, and just couldn’t find our man on the defensive. I’m glad we kept digging and were able to pull it out after that second overtime.”

Action was back and forth early in the contest with the Lady Wolves trailing 15-13 after one quarter of play. The Lady Bulldogs held on to their lead throughout the second period of play. At halftime Holmes led the Lady Wolves by four, 27-23.

File photo/Enterprise’s Zach Hodges (15) drives the base line to get away from a defender in a game last season.... read more