Chamber gives kudos to its membership at annual banquet Thursday

Beyond the Rainbow and the Lincoln Civic Center were big winners at the Brookhaven-Lincoln County Chamber of Commerce’s annual banquet held Thursday night at Old Towne Church.

Tables were packed in the dining area overlooking the picturesque courtyard as other winners were announced.

Outgoing President Mike Whatley called out the names of winners and those present received certificates and gifts.

Educators of the Year were Christy Rounsaville and Dianne Watson from Brookhaven Academy, Laura Ann Walker from Alexander Junior High, Tammy Stanford from Mississippi School of the Arts, and Ashley Douglas from Enterprise Attendance Center for Lincoln County School District.

Ambassador of the Year was Jason Snider of King’s Daughters Medical Center.

Agribusiness of the Year was Lincoln Civic Center.

Small Business of the Year was Beyond the Rainbow.

The room erupted into laughter after Henderson and Dickey’s names were called for their recognition as Dickey, hearing they were receiving gifts, said, “I hope it’s a new car.”

Dickey, who will be 92 in February, said she’s been an ambassador for at least 25 years. Long after retiring, she has kept busy with the Chamber, proudly wearing her red jacket to ground-breakings, ribbon-cuttings and Chamber events.

“I love the people that I meet and I love my town,” she said.

Henderson said she’s been an ambassador for at least 10 years. She retired from Trustmark recently but plans to continue her volunteer work with the Chamber. “I’m not going to give it up,” she said. “I love it. I’m a people person.”

Anna Day Douchard accepted the award for the Small Business of the Year. She and her father, Greg Day, own Beyond the Rainbow, a boutique that has been carrying children’s apparel and other merchandise for 31 years.

She choked up when Beyond the Rainbow was announced, even though she’d been told earlier of the award.

She said when she was told they’d won, she said she knew all her family’s hard work had paid off. “It make it feel validated,” she said. “I’m absolutely honored.

Whatley said members have seen “great things” in the past year in Brookhaven — lights on buildings, remodeling in the downtown area and return of the Business After Hours, which Whatley said were attended well. The Chamber is looking for more businesses to host the events, he said.

At the conclusion of the awards presentation, Whatley passed the gavel to Walker.

“Being a member of the Chamber is about community,” Walker said. “We’re blessed to live in Brookhaven. The Chamber is people who make the community great.”

Walker said the Chamber has been helping its members for 83 years and has grown to nearly 300 members.

“I want to ask for all of your help to not screw this up,” he said. 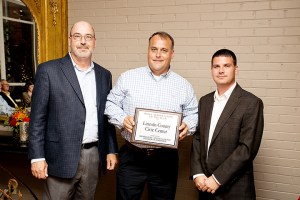 Photos by Amy Rhoads/Quinn Jordan with the Licoln Civic Center and Baseball Complex (center) accepts the Agricultural Business of the Year Award at the Brookhaven-Lincoln County Chamber of Commerce annual banquet from President Mike Whatley and Executive Director Garrick Combs. The banquet was Thursday at Old Towne Church. 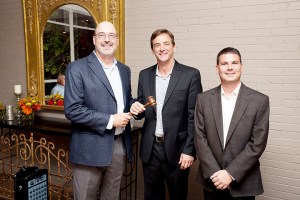 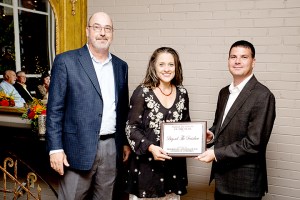 Beyond the Rainbow co-owner Anna Day Douchard (center) accepts the Small Business of the Year Award at the Brookhaven-Lincoln County Chamber of Commerce annual banquet from President Mike Whatley and Executive Director Garrick Combs. The banquet was Thursday at Old Towne Church.

Those burning debris or leaves within the city will see fines as well as flames. Anyone burning without following the... read more