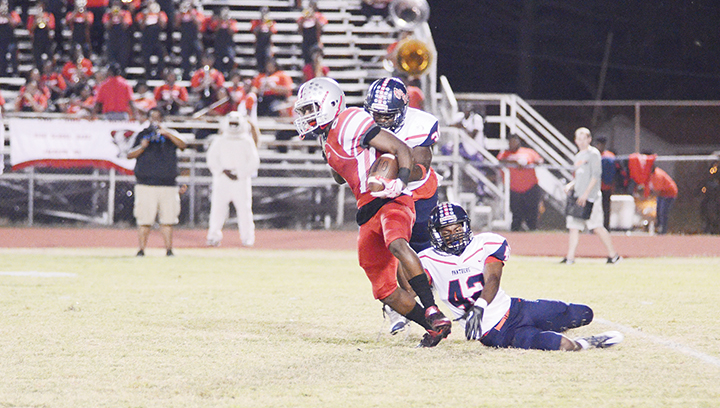 File photo/Brookhaven’s Trenton Smith (42) helps pull down a ball carrier earlier in the season. Brookhaven hopes to close out the regular season with a win tonight.

The Brookhaven Panthers play their final football game of the regular season tonight at Natchez. The region game pits the 7-3 Panthers (4-2 in region play) against the 1-9 Bulldogs (0-6).

Over the course of the 2016 season, Brookhaven’s Damarrell Leggett has racked up more than double the rushing yards per game than Natchez’s leader, Tydarrius Terrell. Leggett and Terrell have amassed 101.1 yards and 48.6 yards, respectively.

Air travel has been heavier for Natchez, however, with 157 passing yards racked up per game for Christopher Scott. Byrion Robinson, who replaced the injured Sevante Quinn for the Panthers, had his best night against West Jones, completing 8-of-12 passes for 112 yards. 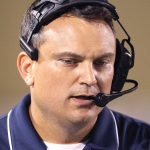 Going by stats alone, including the average of points scored per game, Brookhaven looks on paper to have a slight advantage. Overall records definitely boost that advantage.

“This is our last regular season game,” said Panthers coach Tommy Clopton. “We have an opportunity to come out on top with a healthy win going into the playoffs.”

Last season’s faceoff between the two teams began with an early lead by the Bulldogs, scoring 20 points in the first half against the Panthers’ 14.

Natchez could not maintain the lead after the half, however. Brookhaven scored 10 unanswered points in the third quarter, and another seven points in the fourth quarter to pull off a 31-20 win.

Clopton and his Bulldogs hope to repeat the W when they meet again to finish regular-season play.

Kickoff at Natchez is 7 p.m.

The MHSAA football  playoffs for Class 4A begin today at 7 p.m. in locations around the state. The one that... read more