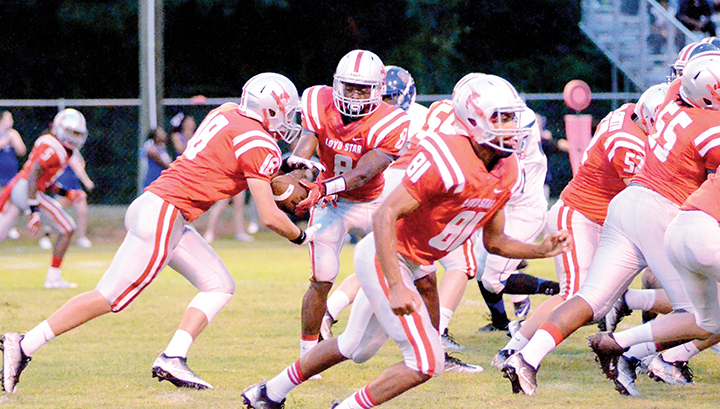 File photo/Loyd Star’s Michael Harvey hands the ball to Konner Allen during a previous game. The Hornets will face North Forrest in the first round of the playoffs tonight.

The Loyd Star Hornets wrapped up the football regular season play with four wins and seven losses. Tonight they face the North Forrest Eagles in the first round of the playoffs.

The Eagles finished the regular season with four wins and six losses.

Loyd Star is the No. 4 four seed in Region 7. North Forrest fills the Region 8 No. 1 slot.

The Hornets have out-performed the Eagles over the course of the season in nearly every statistical category. Loyd Star has scored an average of 31.5 points per game. North Forrest has averaged 20.1 points per game.

And while the Eagles have edged ahead in passing yardage with 106.2 yards per game against the Hornets’ 97.6, North Forrest has rushed for a mere 94.7 yards per game versus the Loyd Star average of 231.9 yards.

In all of these areas, Parker Flowers has been the Hornets’ stats leader.

If Flowers and his teammates stay focused, they have a good shot at the W in this first round.

Cook described the North Forrest team as a classy bunch who play clean, but nevertheless are very athletic and very physical.

“They’ve beaten four good teams,” Cook said, “and have a good quarterback and big receivers. It will be a challenge.”

“We’ll have to play our best, but we’ve had a good week of practice, and we have a great positive team mood and outlook,” said Cook. “Anybody can win on any given day.”

If Loyd Star does win, they will next face the winner of the Puckett – Heidelberg faceoff.

The Bobcats of Bogue Chitto will kick off their final regular-season game Friday in Springfield, Louisiana. Neither team boasts a... read more