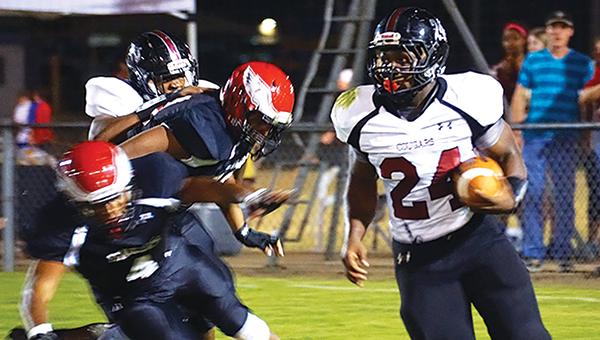 QUITMAN — The Quitman Panthers scored two fourth-quarter touchdowns to fight off an upset bid from Lawrence County, beating the Cougars 28-15 in the opening round of the 4A football playoffs Friday night.

Lawrence County used a 27-yard Quitten Brown touchdown run and some two-point trickery to gain a 15-14 lead late in the third quarter, but Quitman dominated the fourth quarter to advance to the second round

With the win, Quitman, coached by Steven Bynum, improved to 6-6 on the season. Lawrence County, under third-year coach Jaymie Palmer, finished its campaign at 4-8. After finishing 13-2 and going deep into the playoffs last season, Palmer was still upbeat about the efforts of this year’s four-win team.

“I’ve never had a team fight any harder than tonight,” said Palmer. “I’m disappointed that they didn’t get to celebrate a win, but I couldn’t have been prouder of the effort. Not much went right for our team tonight, or for the whole season for that matter, but they gave it their all, and I’m proud of them.”

Lawrence County went into the game without long-time quarterback Charl’Tez Nunnery, who dislocated his throwing elbow two weeks earlier. The Cougars started A.J. McLaurin, and he had a great first quarter, but suffered a leg injury on the final play of the first quarter. Marcus Atterberry also played the position, but suffered a back injury on a second-quarter sack. Kemarcus Brown thus played most of the game at quarterback.

Lawrence County’s defense held up well in the first half. The Cougars’ 7-0 lead stood up until the final minute of the half, when Quitman’s Jed Lewis hit Levi Myrick for 18 yards and a touchdown. The pass wasn’t intended for Myrick, who caught the football in the very back of the end zone, after it was deflected by a Cougar defender near the goal line. The extra point was missed, making it 7-6 at the half.

With Lawrence County having limited options on offense, Quitman quickly forced a three-and-out to start the second half. The Panthers then grabbed their first lead on a 38-yard touchdown pass from Lewis to Ty Carpenter. A two-point run gave Quitman a 14-7 lead.

Trailing 14-7 and severely undermanned, Lawrence County put together a drive for the ages to regain the lead. Quitten Brown ran the football on eight of the nine plays in a 65-yard drive. The only other play was an 18-yard pass from Kemarcus Brown to Drew Nelson, who wrestled the football away from a Quitman defender. Quitten Brown then broke loose for a 27-yard touchdown run.

Trailing 14-13, Lawrence County lined up to kick what would have been a game-tying extra point. However, holder Nelson flipped the ball to Ikeem Showers, who sprinted toward the right and threw to a wide-open Azar Myles, giving the Cougars a 15-14 lead.

That lead did not stand up. In the fourth quarter, on its final two possessions of the game, Quitman ran over Lawrence County’s youthful, undersized defense. The Panthers took the lead with 7:57 remaining on a Saveonn Evans one-yard plunge, then put the game away on a six-yard Lewis keeper with 1:54 remaining.

For Quitman, quarterback Lewis rushed for 75 yards, and passed for 60 more.