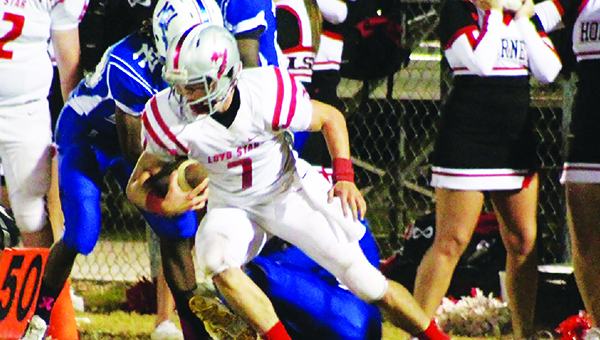 The Loyd Star Hornets missed their shot at the MHSAA 2A championship when the North Forrest Eagles soared to a 42-7 victory in Eatonville Friday night.

The Hornets’ season ends with a 4-8 overall record.

North Forrest dominated in all phases against Loyd Star. Eagle freshman Eric Robinson got things started with a 10-yard touchdown run to put the homestanding Eagles up 6-0 with 6:38 left in the first quarter. On his team’s next possession, Robinson rattled off a 32-yard scoring dash to put North Forrest up by two scores.

North Forrest took a 14-0 lead into the second quarter as they drove down the field on the arm of Daylyn Croom, who capped off the drive on a one-yard quarterback sneak. Lining up for the point after, the Eagles missed wide left.

Facing their third fourth down of the night, the Hornets lined up to punt. Hoping to catch the Eagles off guard, the Hornets faked the punt and attempted to pick up the first through the air. The Eagles took over on downs as the pass was incomplete.

The Eagles’ Croom scored for his second time as he once again was able to sneak for a one-yard touchdown. The Eagles went for the two-point conversion and added to their score. Halfway through the second quarter, the Eagles found the end zone again after Robinson was able to pick off the Hornets’ Parker Flowers.

Seeing themselves in a third and long, Flowers took off running, picking up enough yards to put the Hornets into a manageable fourth down. With time running out, the Hornets went for it and picked up the first on a 15-yard pass from Flowers to Zac Arnold.

Terence Kyser’s two-yard run put North Forrest up 20-0, and was the first of four touchdowns for  coach Anthony Dillon’s club in the second quarter. Christian Williamson (one-yard run), Leon Jones (21-yard reception) and Robinson (45-yard catch) accounted for the rest of the offensive showing in the first half, as the Eagles carried a 42-0 lead into intermission.

Punting the ball away to start the third quarter, the Hornets managed to pin the Eagles on the 20-yard line. The Eagles mishandled the snap and the Hornets recovered. Mixing up their play calling, the Hornets were able to move down the field, but their drive stalled out on the 35-yard line.

Halfway through the third quarter, Flowers broke free for a 42-yard touchdown. The Hornets went for the onside kick and were able to recover. Flowers led his team down the field before stalling at the 25-yard line. The Hornets attempted the field goal to start the fourth quarter, but the kick fell short.

Once again the Eagles mishandled their snap with the Hornets pinning them on their two-yard line. Following the punt and a penalty by the Eagles, Flowers connected with James Beard for a 20-yard gain. The game ended as they converted their fourth and goal.

“The guys are having fun and they’re very confident right now,” Eagles’ coach Anthony Dillon said. “So we’re excited about it. We just tell them, ‘Don’t get complacent, though. There’s always room for improvement.’ There’s not a perfect game, but we’re coming out and working hard every week on all three phases of the game.”

Hornets coach Adam Cook was proud of his team’s play, especially the seniors in the last game of their high school careers.

“I’m proud of the effort from the seniors,” he said. “Hats off to Coach Dillon, the players, and the coaching staff. They are a great team and I predict they will go far in the playoffs”

A whole gang of Bobcats attempt to take down a Springfield runner. Springfield got its first win of the season... read more