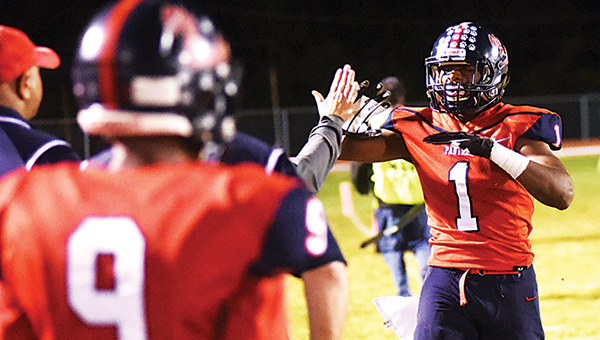 Photo by Ben Hillyer/ Brookhaven’s Damarrell Leggett is congratulated on the sideline during Friday’s win over Natchez.

The Panthers racked up 248 yards en route to racing past Natchez High School 44-22.

Damarrell Leggett had scoring runs of 35 and 47 yards, and Byrion Robison added a 55-yard scamper through the middle of the Bulldogs defense for Brookhaven’s big scoring plays.

“I thought once we got some things established running the ball offensively, I thought we did what we needed to do,” Brookhaven High School coach Tommy Clopton said. “We executed, and we only punted one team. Our guys played very hard.”

Kenneth Dixon had a 14-yard scoring pass from Robinson.

With the loss, Natchez lost its final 10 games to close out the regular season.

Natchez (1-10, 0-7) quarterback Chris Scott threw for 242 yards and three scores, but the University of Louisiana at Lafayette commit was pressure and harassed all game long.

The Panthers (8-3, 5-2) tallied three sacks in addition to limiting the Bulldogs’ ground game to just 8 yards.

“It seems like Chris has been playing forever,” Clopton said. “He’s a very talented young man with a strong arm. They pose some problems, and we wanted to bring some pressure and get to him early. I thought our guys hard. We had some opportunities for some interceptions, but we just dropped them.”

Scott found wide receiver Ty Terrell for two of his touchdown passes. The senior athlete had receiving scores of 34 and 15 yards, while fellow senior Travion McDuffie had a 13-yard scoring strike.

The Panthers outgained the Bulldogs 281 yards to 250.