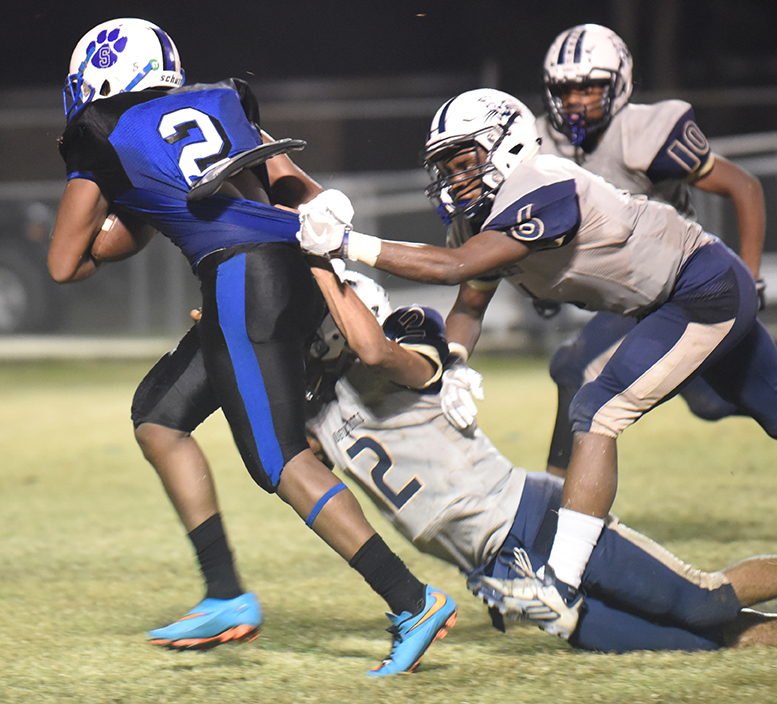 A whole gang of Bobcats attempt to take down a Springfield runner.

Springfield got its first win of the season against Bogue Chitto Friday night, ending the Bobcats’ hopes of wrapping up the season on a high note.

The Bulldogs dominated for most of the 59-32 victory. Damariae Claiborne (3) and fellow senior William Barnett (4) combined for seven touchdowns on the ground, while sophomore John’l Fryson added one to lead the Bulldogs (1-9) to their first and only win of the season.

The Bulldogs’ defensive secondary, which spent most of the season struggling, held Bobcats’ junior quarterback Trey Nettles to just a 4-for-14 stat line with 81 yards and an interception.

Freshman quarterback Shaw King fared a bit better, completing 7-of-13 passes for 166 yards, with three touchdowns and an interception.

In the first quarter, the Bobcats came out with an onside kick and were successful in the try. They would march down the field and score. Trey Nettles capped off the drive with a seven-yard run.

At the 8:02 mark, the Bulldogs answered with an eight-yard run by Claiborne. Chris Durbin had a big reception to set the offense up for an easy touchdown. The Bulldogs again found the endzone easily with a one-yard run by Barnett and led the Bobcats 14-6 at the end of the first.

In the second quarter, the Bulldogs stopped a Bobcat drive when Cameron Barnum pulled down an interception. Barnett later scored on a two-yard run.

The Bobcats answered when Nettles ran in a one-yard score.

At the 2:37 mark of the second quarter, Steven Johnson extended the lead with a 28-yard field goal.

The Bulldogs then recovered an onside kick and Barnett hit the endzone on a 15-yard run. The Bulldogs went into the locker room at the half with a 32-12 lead.

In the second half, Claiborne would find the endzone twice, on a 15-yard run and a 19-yard run.

The Bobcats still had a little spark left in their offense though. Zack Upkins hit the endzone on a 50-yard catch and run.

Wesson softball player steps up to the next level