Lincoln County heads to the polls 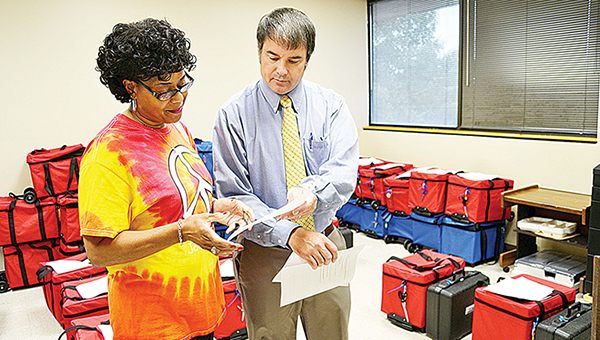 Polls will be open until 7 p.m. in 31 precincts in Lincoln County.

Voters will have the opportunity to cast a ballot for president, state supreme court justice, U.S. House of Representatives Third Congressional District and election commissioner.

“We can honor our members of the Armed Forces who are fighting to protect our rights by voting for our next elected leaders,” Secretary of State Delbert Hosemann said.  “If absentee ballot requests are any indication, Mississippians will be at the polls in full force.”

As of this Monday morning, 112,529 absentee ballots had been requested statewide. This is about 6,000 more than those requested and received throughout the state in the 2012 General Election, Hosemann said. About 1.86 million Mississippians are registered and eligible to cast a ballot on Election Day.

In Lincoln County, 1,477 absentee ballots were requested as of Friday.  Absentee ballots received Tuesday will only be counted for the presidential race, said Circuit Clerk Dustin Bairfield. That’s a federal rule.

No hand delivered absentee ballots will be accepted.

Two voting precincts have changed polling places this year. The City Hall precinct moved from the Chamber of Commerce to the Lincoln County Public Library on 100 S. Jackson St. in order to ensure that the polling place was compliant with the Americans with Disabilities Act.

The Pearlhaven precinct also moved from AbilityWorks to the Bicentennial Building on 200 Main Street. Bairfield said the move was to make room for school events held at the old location.

Voters who experience a problem at the polls or have other questions should call the Secretary of State’s Election Hotline at 1-800-829-6786.  Circuit clerks, poll workers (including bailiffs), and election commissioners can also provide assistance.

Other important information for Election Day is as follows:

• Campaigning: It is unlawful to campaign for any candidate or party within 150 feet of a polling place, unless on private property.

• Privacy:  A voter is not permitted to show his or her marked ballot to any other person.

• Observers: The Secretary of State’s Office will have observers at polling places in at least 32 counties throughout the State.  The Attorney General’s Office will also have observers stationed throughout the State.  Observers do not have the authority to rectify any problems arising at the polls, but they can contact the Secretary of State’s Office and any relevant local election official, District Attorney, or law enforcement officials.

• Write-in votes: Write-in votes are only counted in the event of the death, resignation, withdrawal, or removal of any candidate whose name was printed on the official ballot.

An account has been set up at Trustmark Bank to help a Wesson man’s pregnant wife and children after he... read more