Bernie Reed: ‘We’re in a time of healing’ 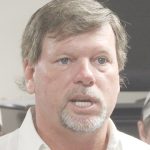 Democrats and bringing cheers from his Republican supporters.

Moak, an attorney in Bogue Chitto, said Trump won by tapping into people’s discontent with the political establishment in Washington.

Brookhaven businessman Bernie Reed voted for Trump after following the real estate mogul’s work for years. In 1998, Reed founded Reed’s Metals in Brookhaven, an act which Reed said was heavily influenced by Trump’s 1987 book, “The Art of the Deal.”

Reed said the biggest issues for this year’s election were immigration and trade. As someone who’s worked in the forestry business, Reed is a big believer in seasonal work visas, but like Trump, he has a problem when people overstay their visa to find permanent work. He described trade as a disaster, and he hopes Trump will be able to fix it and bring jobs to the U.S.

Despite their differences, Reed said he was sensitive to the disappointment Clinton voters might feel, but he felt it’s time for people to come together.

“We’re in a time of healing,” Reed said. “I truly believe four years from now they’ll look back and they’re going to be really happy with the way things are going to turn out.”