Senator: ‘Thank them for their service’ 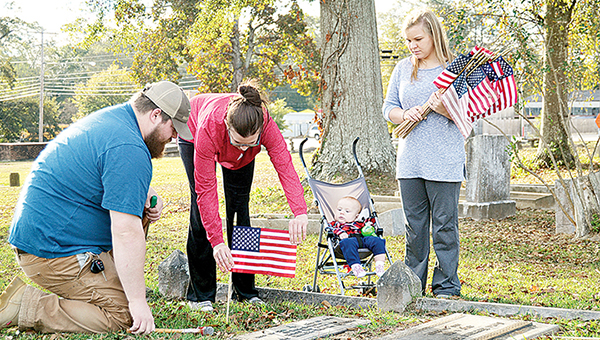 Photo by Donna Campbell/Several families volunteered last week to help the American Legion place American flags at veterans’ graves at area cemeteries. Volunteers are needed Saturday at 8:30 a.m. at the Rosehill, East Haven, Carver Heights and Hillcrest cemeteries to pick up the 3,000 flags that will mark the graves for Veterans Day. Placing flags last week in Rosehill Cemetery were Trey and Hannah Reid, of Caseyville (left) with Hope Gatlin and her son, Colt, of Bogue Chitto. Hannah Reid’s parents, Shawna and Woody Pagett, of East Lincoln, also came out to help.

Veterans Day is commemorated each year on Nov. 11 to honor the men and women who have served and continue to serve in the armed forces and to remember those who have sacrificed their lives for this country.

It became a federal holiday to commemorate Nov. 11, 1918 — the day fighting ceased between the Allied nations and Germany in World War I seven months before the Treaty of Versailles was signed — with thanksgiving and prayer designed to perpetuate peace through good will and mutual understanding between nations.

Today it has become a celebration to honor America’s veterans for their patriotism, love of country, and willingness to serve and sacrifice for the common good.

That’s exactly what the community plans to do Friday as hundreds gather at the Lincoln Civic Center  for the annual Veterans Day celebration.

Veterans and their families will be served a meal starting at 5:15 p.m., and a program will begin at 6 p.m., with Miss Mississippi Laura Lee Lewis, of Brookhaven, singing the national anthem. Pianist Marvin Curtis will also provide entertainment for the evening.

Door prizes will also be given out at the event.

Sen. Sally Doty, R-Brookhaven, said the celebration is a community effort that is organized by those who want to thank the veterans for their sacrifices. They’ve touched everyone’s lives, she said.

“Our veterans have ensured our way of life,” Doty said previously. “It is so important to thank them for their service.”

Pre-registration is not required — veterans can just walk in — but veterans who would like to receive a formal invitation may register their name and address with the Brookhaven-Lincoln County Chamber of Commerce at 601-833-1411. Doty has compiled a large list of local veterans over the years just for this event, and the names will not be used for any purpose other than sending invitations for the Veterans Day event.

American flags marking the graves of known veterans in Rosehill, East Haven, Carver Heights and Hillcrest cemeteries will remain until Saturday morning, when the American Legion will gather the 3,000 flags to store until Memorial Day next year.

Volunteers will be needed at the cemeteries Saturday morning to pick up the flags. For information call American Legion Post Commander Keith Reeves at 601-835-8173.

Trey and Hannah Reid, of Caseyville, visited Rosehill last week after seeing a request to help in The Daily Leader. Hannah Reid brought her sister, Hope Gatlin and her nephew, Colt, of Bogue Chitto, and her parents, Shawna and Woody Pagett, of East Lincoln, to put out flags to mark the graves.

Reid said she plans to be out their again Saturday morning. “It’s the least we can do to honor them,” she said.

Another way veterans can be remembered is with a commemorative engraved brick placed in the walkway at the Lincoln County Veterans Memorial in front of the Lincoln County Government Complex. The memorial was built by the Veterans of Foreign Wars in 1994.

Bricks can be purchased for $75.

Derrall Foster and Hervey Littlefield, who both served in the Vietnam War, organized the project.

Bricks can be purchased in memory or honor of any individual who served in the past or is currently serving in the armed forces. Veterans or their families must have proof of military service — typically a DD-214 form, which serves as a certificate of release or discharge from active duty.

For those still on active duty, their rank and discharge date will be left blank, and they can have their bricks updated at the end of their service.

Littlefield said there are about 2,000 veterans in Lincoln County, and there’s room for 1,800 named bricks. But there are only 230 bricks that have been placed since the project began, and the two have only 11 names that haven’t been processed yet. The pair receive about one to two applications a week and bricks must be engraved in batches of 20.

While the VFW processes the checks for Foster and Littlefield, the engraved bricks are not an official VFW project. Applications for the bricks can be found at Brookhaven—Lincoln County Chamber of Commerce, Janie’s Pastry and at the front desk of the Lincoln County Chancery Clerk’s Office.

Bernie Reed: ‘We’re in a time of healing’