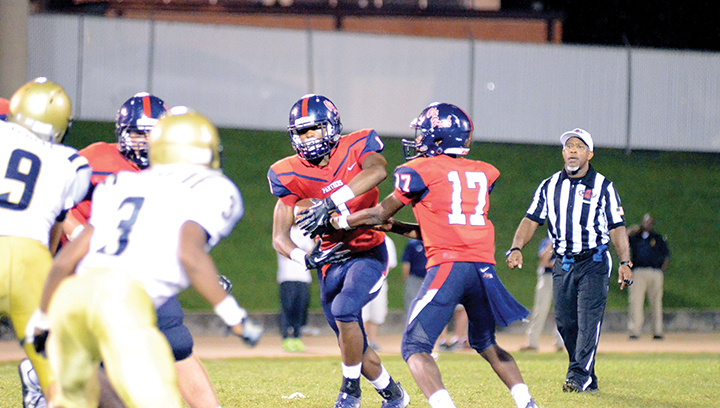 File photo/Brookhaven’s Damarrell Leggett (No. 1) had a big game against Natchez last week, scoring three touchdowns in the win. He will likely need a similar performance if the Panthers hope to beat Hattiesburg.

Brookhaven is ready to meet Hattiesburg in the first round of the 5A playoffs today at 7 p.m.

The Panthers are coming off a three-game winning streak, and the Hattiesburg Tigers have won their last four.

The Panthers beat Natchez last week with a final score of 44-22. Three of those Panther touchdowns were scored by junior Damarrell Leggett at running back.

Both the Panthers and the Tigers have scored consistently across quarters, and have been fairly evenly matched in tackles, with Brookhaven slightly ahead in sacks and rushing yards. Hattiesburg has gained nearly three times the air travel, however, averaging 265.6 yards per game, against Brookhaven’s 98.7.

Brookhaven’s numbers took a hit earlier in the season when quarterback Sevante Quinn was injured.

Brookhaven head coach Tommy Clopton said he is very proud of his senior players. “They have been through the highs and the lows and have battled through adversity,” Clopton said. “This year they have reaped the benefits of dedication and hard work.”

In addition to running back Leggett, who has averaged 11 points and more than 104 rushing yards per game, Panther standouts include junior outside linebacker Jordan Blackwell, averaging 6.7 tackles per game; junior nose guard Jeffery Johnson with 0.7 sacks per game; and junior center Trace Clopton, slamming three pancake blocks per battle.

“Hattiesburg is an extremely talented football team,” said Clopton, “especially at the skill positions.” Ole Brook will need to stay on Hattiesburg quarterback Julian Conner, who averages 246.6 passing yards and 287.1 total yards per game, and junior Fabian Franklin, who has rushed for an average of 77.3 yards in each matchup.

In what looks to be a high-scoring game, Brookhaven will fight for a chance at the next rung in the playoffs, facing the winner of Laurel (Region 3 No. 1) vs. Stone (Region 4 No. 4). “We have to continue to play our game to have a shot at advancing to the next round of the playoffs,” said Clopton.

“We have been a very physical defense all year and I expect our guys to go out and play extremely hard.”

“Offensively we have to continue to run the football and be opportunistic in the passing game,” Clopton continued. “If we are able to control the line of scrimmage on both sides and limit their big plays, we have a great chance at advancing to the next round.”

Clopton and Panther fans are not ready for this season to end just yet. Clopton noted, “We look forward to watching them play for four more weeks.”