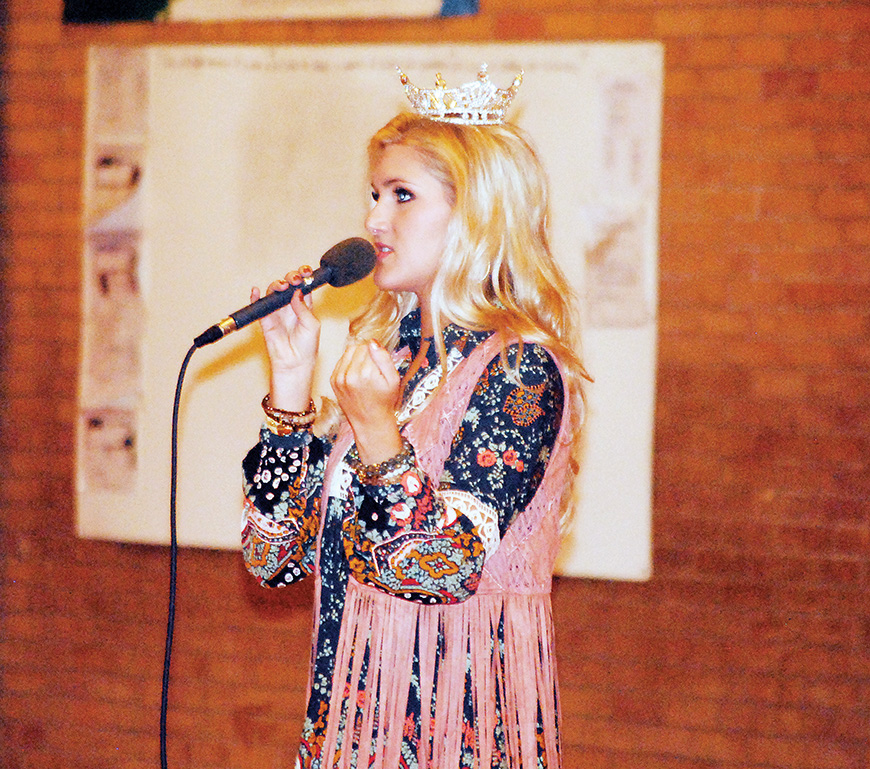 Photo by Aaron Paden/Miss Mississippi Laura Lee Lewis recently spoke to students at Lipsey School and Brookhaven Academy on behalf of the Servitium Club, an organization dedicated to serving the children of Lincoln County.

Students at Brookhaven Academy and Lipsey Elementary were awed this week as Miss Mississippi Laura Lee Lewis told them how to be heroes.

“Whether it’s kindergartner or a 12th grader, it’s never too early or too late for them to learn how to make good choices and follow their dreams,” Lewis said after the event at Lipsey.

The events were sponsored by the Servitium Club, an organization dedicated to serving the children of Lincoln County.

“Sitting back and watching Laura Lee Lewis grow up and seeing the obstacles she’s encountered in her life, it’s been rewarding to see her come back and cherish a story with the Miss Mississippi crown on her head,” Servitium Club President Jason Snider said. “That’s a statement that speaks very highly of herself and the family she has.”

Lewis, a Brookhaven native, spent Wednesday relating her story to the children at the two schools. She also spoke at the Servitium Club’s weekly meeting. As a teenager, she was diagnosed with midface hypoplasia, a condition that caused her upper jaw, cheekbones and eye sockets not to grow as quickly as the rest of her face.

Lewis couldn’t undergo surgery until she had stopped growing, and through those years she was heavily bullied for her appearance.

“She’s an example of what determination and hard work does,” Snider said. “It doesn’t happen overnight.”

But Lewis didn’t give up and she didn’t let it get her down. She pursued her dreams and after four attempts she was crowned Miss Mississippi in June. She also shared the story with students in order to encourage them to face the obstacles in life and pursue their dreams, and it’s a story that resonated with the students.

“She’s got a very strong on-stage presence,” Snider said. “Some of these kids kind of sat back, not really wanting to pay attention. But I noticed at the end of her speech they were locked onto her. She’s got such a great story that locked into her audience really well.”

Lewis said she was happy to be able to return to Brookhaven to invest in its youth the way Brookhaven invested in her.

“It was an honor to come back to Brookhaven and share a positive message with our youth,” she said.

Bright Futures: Marine wants to be something greater