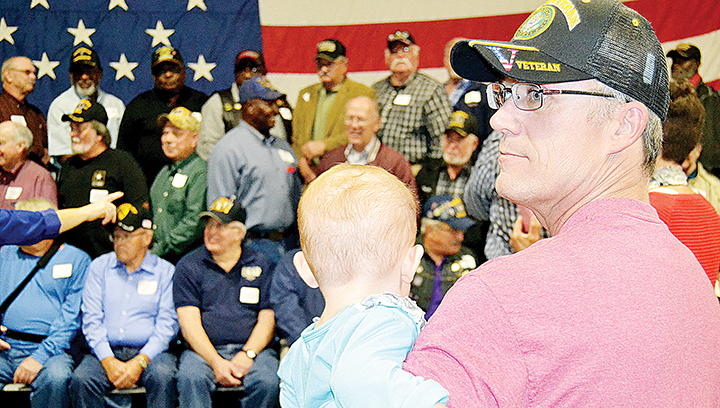 More than 350 veterans and their families shared a meal and experiences on a day set aside to pay tribute to their sacrifices.

This was the fourth year Lincoln Countians have hosted the Veterans Day Celebration, said Sen. Sally Doty, R-Brookhaven, one of the organizers.

Doty sends out personal invitations each year from the names and addresses she collects all year long. About 100 more veterans attended this year’s event, which was the largest crowd to date.

“It was such a great response,” she said.

Nov. 11 has always been a special day for Doty because it was her father’s birthday. This year, she shared a memory of her dad, Sgt. 1st Class Charles Burchfield, who died in July. Burchfield, an Army tank commander during the Korean War, had attended the three previous Veterans Day events and Doty missed seeing him there Friday.

“I always gave him a shout-out from the podium,” she said.

Rep. Becky Currie, R-Brookhaven, has been involved in the group of volunteers who puts on the annual event from the start, and has helped with all four celebrations.

“It is always my pleasure to honor our veterans at this event every Veterans Day,” she said. “It is just a small way of thanking them. I love seeing them come together to catch up with their fellow veterans and their families. It has become the place to be on Veterans Day.”

Though Currie was all smiles while talking to the men and women who fought for her freedom, she couldn’t help but feel a bit of heartbreak for those who didn’t return to the celebration this year.

“It is sad because we lose a few every year,” she said. “We had 17 World War II Veterans there last night and we had 22 the year before. I am glad we get a chance to thank them every year.”

After the barbecue dinner from Broma’s, Doty and Currie, with help from Lincoln Civic Center facilities manager Quinn Jordan, organized the veterans for group photos, gathering each group together based on the war in which they served. Those who served in peacetime were in a photo together.

The photographs will become part of the Military Memorial Museum’s treasures.

Roy Barnett Jr. held his granddaughter, 2-year-old Delilah Barnett, while his father got his photo taken with others who served in the Vietnam War. It was the largest photograph taken, with 65 veterans posing for the cameras.

The older Barnett had been to the previous events, but this was the first time his son had joined him.

“I think it’s wonderful,” Barnett Jr. said. “People come in and shake your hand and say ‘Thank you for your service.’ It means a lot, especially the way things are now.”

Miss Mississippi Laura Lee Lewis, a Brookhaven native, sang the national anthem and also recognized each branch of the military as they stood during their respective military hymns. Army, Marines, Coast Guard, Navy and Air Force were each saluted then everyone joined Lewis to sing “America the Beautiful.”

Col. Don Reinhard, U.S. Army retired, of Brookhaven, shared anecdotal stories of his time in the service and talked about his family.

Three of his four children graduated from the United States Military Academy at West Point and have also experienced life in the service. Son Karl commanded troops in Iraq, daughter Susan commanded a maintenance company in the first Gulf War and daughter Elaine spent four years in the armed forces before opening a medical practice in Brookhaven. Son Eric became a tax attorney.

Doty made a point of showing gratitude to all the veterans’ families as well.

“We thank you for allowing your family member to serve,” she said.

Randall Smith, a museum volunteer, offered a special recognition to veterans of the Vietnam War for the 50th anniversary commemoration. The national commemoration began on Memorial Day in 2012 and will conclude on Veterans Day in 2025. It is commemorated over such long period of time to recognize the service and sacrifices that stretched from Nov. 1, 1955 to May 15, 1975.

Smith talked about various communities across the nation that had lost troops in the war, then read the names and shared a bit of history about the eight troops from Lincoln County who died and are listed on the Lincoln County Veterans Memorial at the county government complex.

Though the event is held each year to celebrate the men and women who served, Doty said it’s important to also remember those who have died. At the conclusion of the event, several trumpeters played taps.

“In honor of those that we lost this last year,” she said.

Several sponsors and many volunteers work to put on the event each year.

“Anyone who wants to be a part of it, we’d love to have their help and support,” Doty said. “I appreciate everyone in the community who helped us. It was certainly a group effort.”

With the New Year approaching quickly, many have begun to reflect on the vices that haunt them on a daily... read more