Deepwater Horizon survivor: ‘I am lucky to be alive’ 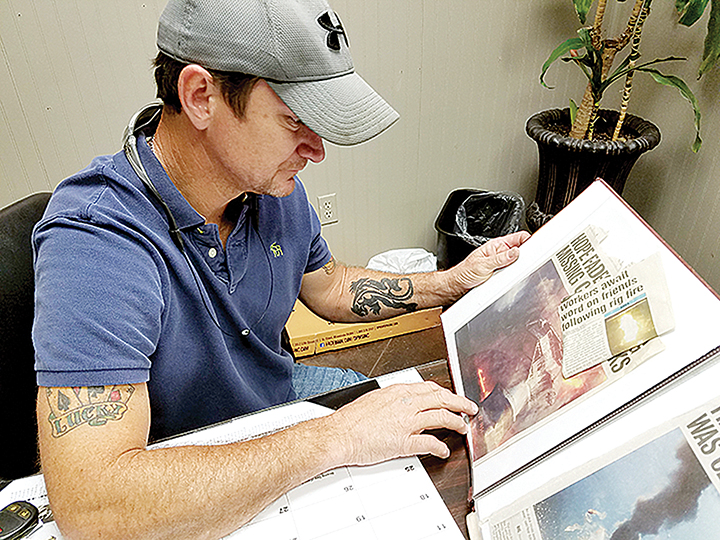 Photo by Donna Campbell/Ken Roberts looks over a scrapbook of news articles he’s collected about the Deepwater Horizon explosion. Roberts, of Loyd Star, was one of 126 workers on the oil rig that exploded in 2010.

Either way, he figures he’s fortunate to be alive.

The 47-year-old car detailer from Loyd Star was one of 126 workers on the Deepwater Horizon oil rig when it exploded April 20, 2010. The blast was triggered by a blowout of BP’s Macondo oil well, located off the Louisiana coast in the Gulf of Mexico. Eleven of the men were never found.

It created the worst oil spill in U.S. history, spewing nearly 4.9 million barrels of oil into the gulf.

Roberts hasn’t seen the movie, “Deepwater Horizon,” which stars Kurt Russell, Kate Hudson and Mark Wahlberg and was released in September. He plans to watch it on DVD when it comes out so he can be alone with his girlfriend and turn it off if he needs to.

He’s thinks he will need to.

“I’m sure it will bring back memories, but I’ll have to face them,” he said.

Roberts was employed at Car City in Brookhaven in March 2010 when he was offered a chance to work on an oil rig. His brother Roy had been on a rig for a while and got him an interview with Art Catering, which feeds workers on rigs out in the Gulf of Mexico. He got a job as a galley hand — starting on the bottom, but with dreams of working his way up, he said.

He worked his first two- week hitch then came home for two weeks. He went back out and was in the galley on the night shift washing dishes while the baker was getting ready for the next round of diners. It was his second night of his second hitch.

They were on the deck directly under the platform. The galley’s big metal doors were locked.

Roberts thought a huge pipe had fallen off the rack above them and hit the floor of the platform, which was on the other side of their ceiling.

“The baker said, ‘I’m getting out of here,’ and I proceeded to follow him,” Roberts said. “That’s when chaos erupted.”

He said the lights started to flicker and then an explosion blew the galley doors off the hinges.

Roberts was knocked out cold for a few minutes. “I woke up under a dining room table,” he said.

He never saw the baker after the explosion. “He scrambled,” he said. “He was faster than me evidently.”

Roberts said the workers were required to attend a safety drill every Sunday, so he knew to make his way to a 60-man lifeboat capsule that would take them to safety. It was just out the doors and around the corner. He made his way there past the overturned tables. He was wearing his Art Catering shirt but no hardhat or safety vest.

He still didn’t know what had happened.

“I figured out it was something bad and I better get gone,” he said.

There was a second explosion while they were in the capsule, still attached to the rig. He said he was scared enough that he was considering jumping out of the capsule and into the water 90 feet below. He learned later that six workers jumped off the rig and survived.

He stayed put and they soon were lowered into the gulf and made their way to a nearby supply boat.

When the capsule, which looks like a small submarine, got far enough away from the rig, the men could see the extent of the damage through the small windows. “It was a ball of fire,” he said.

In the first explosion that knocked him out, Roberts suffered a back injury. He was airlifted from the supply boat, riding in a cage to a Coast Guard helicopter to be flown to the hospital.

It took three days for his brother to learn he was alive.

Roberts counts himself lucky — he even had the word tattooed on his right arm two weeks after the explosion. “It could have been a lot worse,” he said.

Besides the back pain, Roberts suffers from post traumatic stress disorder. He doesn’t like loud noises. Reminders of that day “make my guts turn” just thinking about it, he said.

He attended the one-year anniversary of the explosion in 2011 in Jackson where country singer Trace Adkins paid tribute to the 11 men who died.

Roberts received a small settlement from BP. He wished the company had done more to secure the rig and prevent the explosion.

“It’s a bad deal,” he said. “It’s all about making money. It makes people do strange things.”

Roberts’ former boss Ron Lambert at Car City hired him back when he was able to work again. Roberts said he doesn’t think he could ever work on an oil rig again.

He hopes the movie is accurate in its retelling of the incident.

As fall weather starts to kick in, locals will be looking for a good warm meal, and the Servitium Club... read more