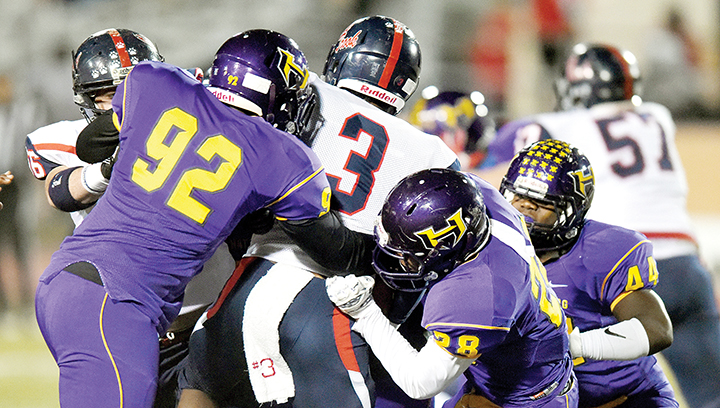 Photo by Susan Broadbridge/Hattiesburg American/
Brookhaven’s Kenneth Dixon is stopped by a host of Hattiesburg defenders Friday at Hattiesburg.

The Brookhaven Panthers’ season came to a close Friday night with 42-14 first-round playoff loss to the Hattiesburg Tigers.

The Panthers ended the season with a 8-4 overall record.

The Tigers effectively put the game away in the third quarter. Hattiesburg, with a seven-point lead, forced a Brookhaven punt by stopping the Panthers in the backfield on a third-and-6 run. With favorable field position, the Hattiesburg offense went to work and quickly drove down the field before scoring on a four-yard run from sophomore running back Drexlan Allen to put the game out of reach.

Hattiesburg senior quarterback Julian Conner finished the game with more than 150 yards through the air and two touchdown passes of one yard and 59 yards. Conner also had a seven-yard touchdown run in the first quarter, and he broke out for a 69-yard run to set up a one-yard touchdown pass to senior Jordan Murphy.

Brookhaven junior running back Damarrell Leggett rushed for more than 130 yards on the night, including a 35-yard touchdown run in the first quarter to tie the game at seven. Brookhaven’s other primary back, Kenneth Dixon, was held in check for most of the night by the Hattiesburg defense.

On the second play of their first possession, the Panthers fumbled the ball and the Tigers managed to recover. Right after taking possession, the Tigers found the endzone only to see the touchdown removed by a penalty. The Tigers would commit two more penalties before going for it on fourth down.

Brookhaven’s Kenneth Dixon picked off Conner in the end zone to end the Tigers’ threat. The Panthers, however, were unable to capitalize on the interception as the Tigers forced them to punt the ball away.

Hattiesburg took advantage of their next possession, scoring on a seven-yard rush by Conner.

With a little over two minutes left the first quarter, Leggett rushed up the gut for a 35-yard touchdown to tie the game.

As time was expiring in the first, the Tigers found the end zone again as Conner ran in for the touchdown. The Tigers took a 14-7 lead into the second quarter.

On their next possession the Panthers drove down the field before the Tigers put them into a long fourth and goal. BHS elected to go for the field goal, only to see the Tigers block the attempt.

Following a 69-yard rush down the sideline, the Tigers scored on a short pass from Connor to Jordan Murphy. The Tigers took a 21-7 lead into halftime.

On their first drive of the third, Dixon broke free for a long touchdown.

With over eight minutes left in the fourth quarter, Connor connected with Chandler Phillips for a 59-yard touchdown. The Tigers would again score late in the fourth.