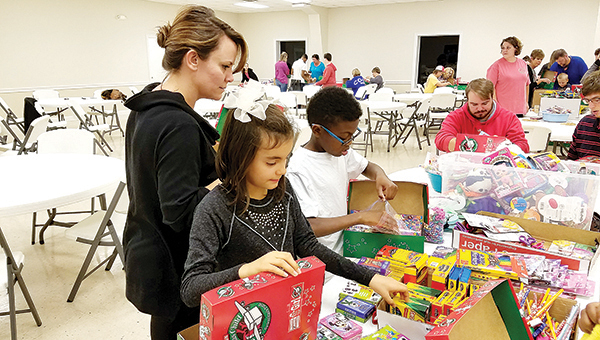 Photo by Donna Campbell/Angi Lins (left) helps Stella Lins and Kaleb Williams pack Operation Christmas Child boxes earlier this week. Aaron King and Cody Barrett, at the end of the table, mark the boxes with the appropriate stickers and seal them for travel.

Rows of red and green cardboard shoeboxes are stacked at First Baptist Church Brookhaven waiting for their delivery to Summit, then Atlanta and then to parts unknown around the world.

Each Operation Christmas Child box is packed with treats, toys, useful items like socks and toothpaste and a message of God’s love.

Brookhaven FBC is the relay center for Lincoln County and churches, schools, organizations, businesses and individuals have until Sunday to get their boxes in to be shipped through Samaritan’s Purse, a non-denominational evangelical Christian organization that provides spiritual and physical aid to people around the world.

Volunteers at FBC will be at the church today through Friday from 8:30 a.m. to 4 p.m. to accept the boxes. They’ll also be taking boxes Sunday until noon. They’ll pack them in bigger boxes to be shipped in a donated Wal-mart truck to Southwest Community College, where they’ll join other boxes headed to Atlanta.

Families at Southway Baptist Church met Sunday night for a packing party to fill 205 shoeboxes with items that members had been bringing each month since last Christmas. Each month, the church asks for certain items, like crayons and coloring books one month and small tubes of toothpaste and toothbrushes in another. That way, Southway organizer Angie King said, they have plenty of each item to fill all the boxes. King and Misty Morrison led the packers who were set up at tables based on ages and sex of the intended receivers.

“Many people have been donating all year long,” King said. “We have some people who could be professional shoppers, always looking for good deals.”

Connie Hodges is one of the coordinators at Brookhaven FBC. She said it’s not too late to start packing boxes for this season.

“They can put it in any kind of shoeboxes,” she said. “It can be a shoebox out of their closet. It can be a plastic box from the store.”

The boxes will be delivered to girls and boys age 2 to 14. Boxes should be marked with the sex and age of the intended recipient, she said. A $7 donation for shipping is requested and the money can be placed in the box. Volunteers at the relay center don’t touch the money. It’s taken out when the boxes get to Atlanta, Hodges said.

“We just pack the boxes in bigger boxes so they’re easier to ship,” she said.

Hodges and some of the other volunteers will be traveling to Atlanta soon to help in the distribution warehouse. It’s a trip she’s made 11 years in a row. She said she’s involved with the charitable event each year because of the message of love that is spread through the boxes and received by children she will likely never meet.

“It’s a way to be a missionary and never leave your home,” she said.

While the boxes are stuffed with fun toys and useful items, a message about Jesus is also included in each box, printed in the child’s language.

“They will be presented with the gospel. It’s not just a Christmas gift,” she said.

Hodges said FBC got involved in the program about 13 years ago when the late Patricia Henning suggested it. It’s an easy, affordable mission opportunity, she said.

She said lots of families fill boxes together and present to the church on a designated Sunday. “It’s a good teaching opportunity for your children,” she said. “It’s an opportunity to teach your children about giving and showing them how blessed they really are.”

File photo/The Brookhaven Board of Aldermen will hear from owners of this property on Railroad Street as well as their... read more