A man accused of armed robbery during a break-in in Bogue Chitto in 2014 pleaded guilty Wednesday in Lincoln County Circuit Court. 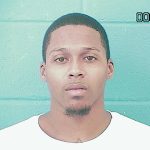 Alvin B. Franklin, 24, offered the plea to Circuit Court Judge Michael M. Taylor after the jury had been seated, but before his trial began.

Franklin was accused of breaking into a home on Chestnut Lane in May 2014 with Jawon D. Williams, 24. The residents were present at the time of the incident when Franklin and Williams are alleged to have stolen cash, cell phones and a handbag at gunpoint, according to the Nov. 24, 2014, indictment.

The pair are also alleged to have struck one of the residents in the face with the weapon during the incident.

• Burglary of a dwelling — 18 years with six suspended;

• Two counts of simple robbery— each count was 15 years with three years suspended;

Taylor said Franklin’s sentence for the 2014 charges would run consecutively with time he was already set to serve for a 2015 conviction in Madison County for possession of stolen property, Bairfield said.

Williams’ trial will be held at a later date.

Neighbors stick together despite their ages

Photo by Donna Campbell/Cecil Rhodes, 96, and Carson Barrington, 5, have been walking partners in Fisher Park for three years.... read more