Neighbors stick together despite their ages 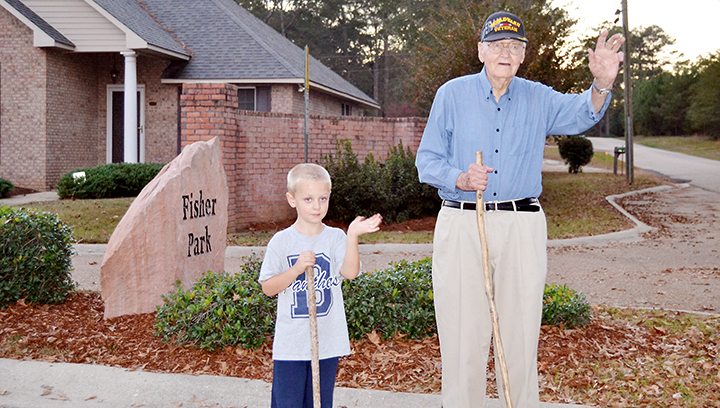 Photo by Donna Campbell/Cecil Rhodes, 96, and Carson Barrington, 5, have been walking partners in Fisher Park for three years. They regularly wave to motorists passing by on Halbert Heights Road in the afternoons. Carson is the son of Steve and Laura Barrington of Brookhaven.

Cecil Rhodes waited more than 90 years to find a friend like Carson Barrington.

As often as they can, the two shuffle past the manicured lawns of Fisher Park to stand on the corner at Halbert Heights Road and wave at the world.

“We can’t cross the white line because that’s in the street,” said Rhodes, a World War II veteran who turned 96 in September.

Carson, a kindergartner at Mamie Martin Elementary, nodded in agreement.

Most days, the “world” is just five cars. Sometimes it’s more, sometimes less, but five seems to be the magic number they gauge their hospitality by.

“When five cars go by, then we’ll come back,” Rhodes said. “Sometimes people will toot their horn.”

Rhodes walks from his house, just around the corner from Carson’s on Fisher Park Street, and checks the front door at the Barrington house. If it’s open, that means Carson’s watching for him and ready to go. They take off down the street, headed to Halbert and that painted white line on the pavement beside the stop sign. They do their waving from the small garden at the entrance to the neighborhood.

When their task is complete, they race back to Carson’s house. The youngster always wins.

The 91 years between them doesn’t seem to matter as they chitchat about Carson’s school day, or the weather, or trains.

Sometimes they just walk in silence, amazed at the beauty of the clouds and the flowers and everything in between.

They amble along with their walking sticks, making a click-clack sound on the pavement.

Rhodes’ stick was a gift from his daughter, Sheila. Carson’s was a gift from Rhodes, who cut it from a persimmon tree in his yard. It’s Carson’s second stick, since he outgrew the first already.

In the three years they’ve been walking together, Carson has grown a head taller and Rhodes a step slower.

“Sometimes I’m a little bit slow, but Carson’s patient with me. He walks right beside me,” he said.

Rhodes was in the Army Air Corps, the U.S. military aviation service that was formed during WWII, before the Air Force came into being. He retired in the ’80s from the Lincoln County Health Department where he’d worked for 30 years. He’s been a widower since his beloved Olivia passed away in 2006. Their son Byron lives with him now. Rhodes volunteers at the Military Memorial Museum once a month.

Rhodes has become the neighborhood grandfather. Families check on him and make sure he’s fed and happy.

“I’ve got the best neighbors. They’ve been real nice to me,” he said.

Carson’s mother, Laura Barrington, said it’s been a great bonding experience for her son to be around someone with so many years of wisdom.

“He has a special place in his heart for Mr. Cecil,” she said. “They have a great friendship that we all need to have.”

Rhodes looks forward to his walks with the kindergartner.