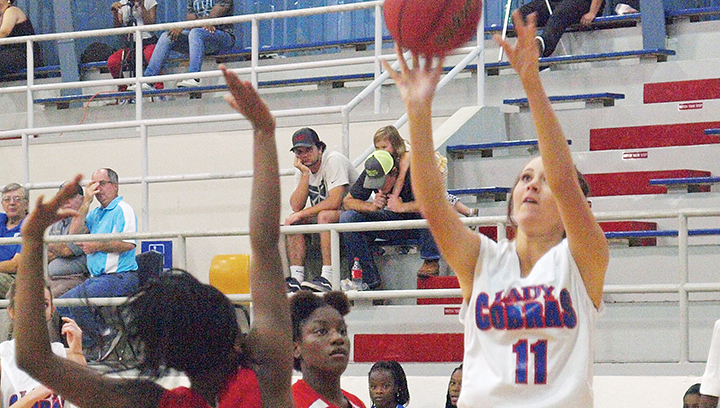 Wesson picked up two wins against West Marion Tuesday, with the boys winning 79-73 and the girls outscoring the Lady Trojans 50-29.

“I think we played well offensively and defensively,” said Wesson boys’ coach Rusty Newman. “The guys played with a lot of intensity and we are glad to finally get the first win. Hopefully we will build off this and continue to have success.”

The Cobras actually struggled early and ended the first quarter trailing in points with a score of 15-1. Wesson came alive in the second quarter with JD Allen hitting two 3-pointers to jump ahead of the Trojans.

Shemar Dickerson, Malik Clay, Kenner Bizot and Jontarius Smith increased the lead to bring the point total to 47-28 going into the half.

With a comfortable lead in the third, Newman was able to let most of the team get some playing time. However, the Trojans came back in the final quarter when AJ Fortenberry hit six 3-pointers in a row to pack the points on the scoreboard and eat up the point gap.

The Cobras played good defense and ended with the win.

Cobra Shemar Dickerson was the top scorer for Wesson with 17 points. Other top shooters were Bizot with 12 points, Smith with 10 points and Will Hulon and JD Allen followed with nine points each. Smith was the top defender for Wesson with 10 rebounds, three assists and one steal. Darrion Gibson had eight rebounds with two steals and one assist.

The Wesson Lady Cobras took their first win of the season against the West Marion Lady Trojans with a final score of 50-29.

“The girls came out and hustled the entire game,” Wesson coach Candice McDuffey said. “We need to improve in making our layups but overall, I am proud of their effort from tip to finish.”

The Lady Cobras started the game taking an early lead with shots by Alashya Vaughn and Alashyia Mims. Wesson held the lead for the entire game and ended with the win.

Top shooter for the Lady Cobras was Alashya Vaughn with a point total of 13. Mims made nine points and Cassidy Harris and Jamiya Christmas had six points each. On defense, Aurianna Vaughn and Alashya Vaughn were the top rebounders with seven rebounds each. Mims, Christmas, and Natassja James had two steals each to put the Lady Cobras back on offense.

The JV team also got a win against West Marion with a final score of 63-49. Darrion Gibson was the top scorer of the game for the Cobras with a point total of 13. Cameron Gladden and Smith had nine points each. Trey Glasper, Bizot, and Slay Acy had six rebounds each and Acy had four steals on defense.