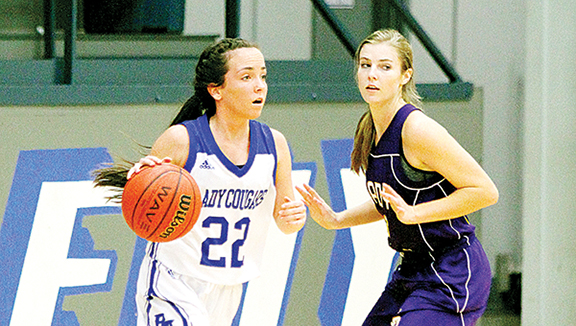 Photo by Sherylyn Evans/Brookhaven Academy’s Sophie Wilson looks for an open teammate while being guarded by Centreville’s Katie Lynn McDowell at a recent game.

Both the Brookhaven Academy Cougars and Lady Cougars are 3-0 so far this season and look to fatten that number in the W column as they play at Central Hinds today and Presbyterian Christian Academy on Saturday.

Boys head coach Josh Watts said his main focus is to try to win every game.

“We’re a young group, with a lot of sophomores and juniors,” Watts said. “More than anything we’re just trying to get a little experience.”

Central Hinds presents a challenge to the Cougars primarily in their guards and in size, with a 6-foot-6 post player Watts describes as “Really good. Definitely a problem.”

Presbyterian Christian has its own challenges, mainly being a 4A school with a lot more depth available. Even so, Watts is confident in his boys’ ability to work as a team.

“We have a group of about eight guys that all play well together, not one really above the rest,” said Watts, “and that’s one of our strengths, that they’re all pretty good together.”

Lady Cougars’ head coach Jason Case is in his first year at the academy. He formerly coached at Natchez for four years, then 20 years at West Lincoln.

His focus for his team is simple: “Great effort and great attitude.”

Case, who is also the academy’s head of school, said the Lady Cougars play well together and have good team unity. “They’re a great group of girls,” he said.

Rather than approaching each opponent as a new challenge, Case said they are working on keying in on what they do as a team, and on doing it well.

“We’ve had a good start, but we have a lot of improvement to do,” he said, “on defense, on rebounding and on minimizing turnovers.”

He added, “We’re trying to perfect our game to get prepped for the playoffs.”

Games at Central Hinds begin at 3 p.m. today, and at 2 p.m. at Presbyterian Christian on Saturday.