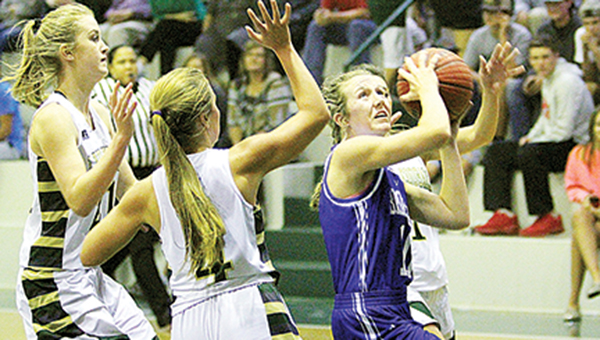 Photo by Sherylyn Evans/Lady Cougar Anna Michael Smith is looking for the goal while being guarded by a trio of Central Hinds players.

The Brookhaven Academy Cougars and Lady Cougars traveled to Raymond Friday to take on the Cougars of Central Hinds in high school basketball action.

After an intense battle of back and forth momentum swings, Central Hinds was able to squeak out wins in both the boys and girls contests.

The Lady Cougars overcame a sluggish offensive first half and a 15-point halftime deficit to take a one-point lead on an Anna Michael Smith three-point basket with less than a minute to play. Central Hinds had one last chance but the opportunity looked bleak with only .7 seconds showing on the clock. After a timeout to set their strategy, Central Hinds was able to find the bottom of the net as time expired on a quick shot off an inbounds play from under their own basket to secure the 33-32 victory. 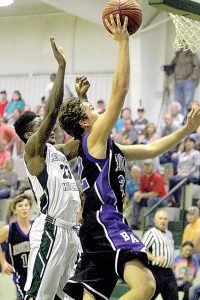 Photos by Sherylyn Evans/BA’s Ethan Nations goes up for the shot with Central Hinds’ Ronald Williams close behind.

In varsity boys action, the young BA Cougars battled an very athletic and senior laden Central Hinds squad but were not able to overcome a fourth quarter run by the home team eventually falling 55-44. Junior Ethan Nations led the Cougars with a 17-point, nine rebound afternoon. Dawson Flowers and Tate Felder posted 10 and seven points respectively. Flowers also had seven rebounds in his evening of work. Peyton Banes and Ronald Williams each had 14 points to lead Central Hinds.

In junior varsity girls action, the BA JV Lady Cougars took a 35-27 overtime win and the JV Cougars cruised to a 34-25 to both remain undefeated on the season. All teams will be participating in the Parklane Thanksgiving tournament on Monday and Tuesday.

The Mississippi High School Activities Association on Thursday announced the divisions for reclassification, and a few local teams will see... read more