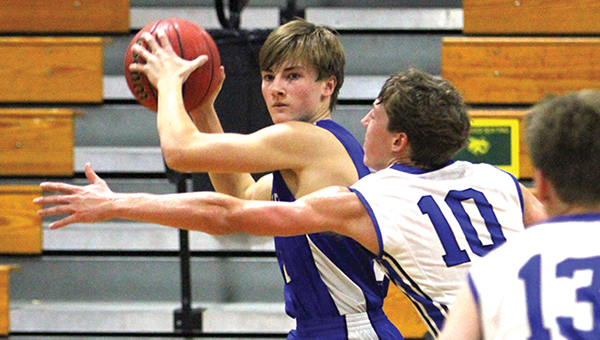 Playing one of their best games of the year, the Cougars were able to match the Bobcats punch for punch and eventually pull away in the end for the 45-33 win. The Lady Cougars, however, saw the tables turn down the stretch eventually falling to the Lady Cats 54-39.

The Lady Cougars (3-2) took a 27-26 lead early in the third quarter and seemed to have PCS in check.  On queue, the Lady Bobcats went on a 14 to 2 scoring run to close out the quarter behind long range three-point shooting from Gabby Gallup who finished the night with 29 points.  The Lady Cougars couldn’t close the gap in the final frame and suffered their second setback of the young season. 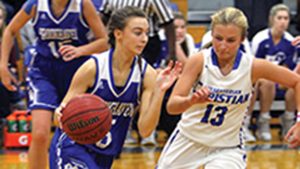 Photo by Sherilyn Evans/BA’s Shelby Flumm drives down the court in Saturday’s game.

In varsity boys action, the BA Cougars (4-1) were certainly outsized and outnumbered but as one Cougar faithful fan put it, “you can’t measure the size of their heart watching them in pre-game warmups.”

Playing their most complete game of the year, the Cougars controlled the tempo, owned the backboards and threw multiple offensive and defensive sets at PCS, keeping them on their heels all evening in what BA coach Josh Watts called a “very big win for our guys.”

Giving up no less than four inches to his multiple counterparts in the paint, Ethan Nations went over, under, around and sometimes through the Bobcat defenders who had no answer to stop the BA junior.  Nations finished the night with 24 points and 12 rebounds to pace the steadfast Cougar attack.  Dawson Flowers added eight points and six boards while Tate Felder tossed in five.

In junior varsity girls action, the BA JV Lady Cougars took a convincing 31-21 win over the Lady Bobcats behind a 15 point afternoon from seventh grader AB Warren.  Freshmen Olivia Lewis and Julie Anna Bartram each had six points respectively for the Lady Cougars who remain undefeated on the season.

Carrying the scoring load with 13 points each from freshman Britton Nelson and seventh grader Tyler Fortenberry, the BA JV Cougars could not overcome the Cats in the end, eventually dropping a nail biter by a score of 38-34 giving them their first loss of the season.

The Copiah-Lincoln Wolves rebounded from their second loss of the season with a 36-point victory over the Delgado Community College... read more