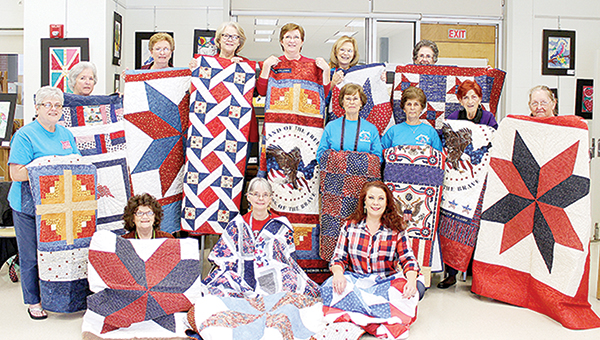 One of Santa’s helpers pulled up to a Monticello car show this past weekend in a U.S. flag-inspired Corvette loaded down in the back seat with hand-stitched surprises for area veterans.

Melissa Allred, the owner of the patriotically painted car and founder of the Brookhaven Piecemakers Quilt Guild, was on a mission of good will.

On behalf of her group, the Bogue Chitto woman delivered 13 quilts to veterans at the show, which was held to raise money for the Children’s Miracle Network.

The quilts had been handmade and donated by members of the guild.

Each was as different as the woman who made it, but they all came stitched with love.

“It was definitely a surprise to all of them,” she said. “They were all shocked.”

Each year, the Brookhaven Piecemakers choose a charitable organization and make quilts for it. Last year it was the Berean Children’s Home, this time it was veterans at a car and bike show who were helping Batson Children’s Hospital through the Children’s Miracle Network. They didn’t know what Allred was up to Saturday, but they figured it was more than just her and her husband’s typical involvement to show their unusual car. “It was a good way to surprise them while they were raising money for the children’s charity,” she said.

Several women in the guild stitched quilts for the giveaway. “One member lost her brother. It was her way of honoring him. She made three quilts,” Allred said. “For others, it was just honoring veterans, whether they have a veteran in their family or not. It’s just a way to give back.”

When the time came to make the presentation, Allred laid the quilts out on her car so the veterans could each choose their favorite. All were patriotic in color and theme.

One Vietnam veteran picked out a neatly-folded quilt and held the square bundle of material to his chest. “He stood there and just hugged it and cried,” she said.

Veterans who served in Vietnam were often overlooked and mistreated when they arrived back to the US, she said. Giving men like him a little happiness with a quilt is just one small way she tries “to right the wrong of how he was treated when he came home,” she said. “He was very emotional that people would think about honoring him as a Vietnam vet.”

Allred served in Iraq with the 155th US Army National Guard in 2009 and 2010. Her husband, Michael, was in the Army in Desert Storm in 1993. Veterans hold a special place in her heart.

About 45 women belong to the Brookhaven guild, which is part of a larger Facebook group Allred started in November 2014. Almost 3,600 quilters all over the world belong to the Veterans Flag Quilt Challenge.

She started the Facebook group after a photograph of a flag quilt she designed and made was posted in another quilt group and went viral. So many people asked for the pattern of the chevron-inspired flag that she decided to give out the pattern for free with one stipulation. “Thousands of people wanted it,” she said. “I gave it away with the challenge that you do something to support veterans.”

The Brookhaven Piecemakers Quilt Guild meets at 9 a.m. each month on the second Monday at the Brookhaven Public Library to show off finished pieces and work on others. They also teach each other new techniques. The December meeting is closed for their Christmas party, but individuals interested in joining can visit in January.