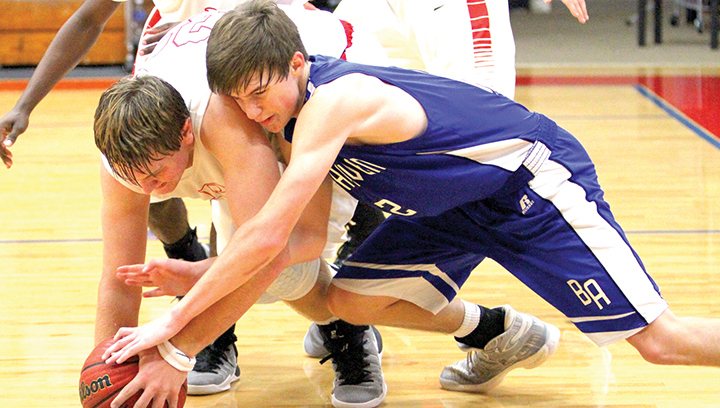 The Brookhaven Academy Cougars continued play in day two of the Parklane Academy Thanksgiving Holiday Tournament on Tuesday, matching wits with the host Parklane Academy.  Both the Cougars and Lady Cougars suffered setbacks at the hands of the home standing Pioneers.

The Lady Cougars (4-3) trailed by a score of 29-18 at halftime and could draw no closer in the second half, dropping the contest by a final score of 63-46 to a very talented Parklane Lady Pioneer ball club.

Jana Case led the Lady Cougars with 15 points and 12 rebounds.  Kailyn Jordan and Anna Michael Smith each had eight.  Cameron Watson picked up seven points and five steals for BA.  Tootie Carter paced Parklane with 21 points on the night.

In varsity boys action, the BA Cougars (5-2) took a 21-20 lead into the locker room at halftime.  A back and forth second half saw the lead change hands several time with neither team able to put it away.  Trailing by a single point, a 15 foot shot from the corner bounced off the front of the rim as time expired giving the Pioneers a narrow 51-50 win.

Dylan Winborne, Ethan Nations and Cade Brown each had 12 points for the Cougars while Tate Felder chipped in nine on a trifecta of three pointers.  Jerimiah Gardner led the Pioneers and all scorers with 25 points.

In junior varsity girls action, the BA JV Lady Cougars (7-1) dropped their first game of the season to the Parklane JV Lady Pioneers by a score of 36-31.  Trailing by three points with :12 showing on the game clock, the Lady Cougars could not convert on the offensive end and Parklane was able to seal the deal from the free throw line and close it out.  AB Warren led BA with 11 points followed by Julie Anna Bartram with nine.

The BA JV Cougars (6-1) took a 22-13 lead into the locker room at the midway break and never looked back on their way to a convincing 40-26 win.  Tyler Fortenberry led BA with a game high 16 points while Trey Fortenberry followed with 13 of his own.

BA will be in action again on Monday when they travel to the River City to take on Natchez Cathedral for four games and their first district contest of the season.  They will be back at home on Tuesday as the Amite School Center Rebels visit John R. Gray Gymnasium.  JV tipoff is set for 4 pm.