Brookhaven and Lincoln County will welcome a legend in the baseball coaching profession when Ron Polk comes to town.

Polk will speak to coaches, players and fans Dec. 2 at 6:30 p.m.  at the Lincoln County Recreation Department. 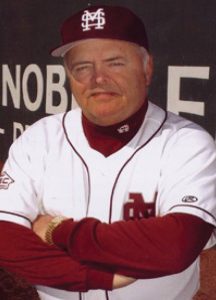 Polk will share his philosophies of baseball, teamwork and life.  This is a rare opportunity for the area to have someone of Polk’s influence on the game of baseball speaking locally.

In 28 seasons in Starkville he skippered the Bulldogs to a 1,116-555-2 record (.667). He has coached better than 47 percent of Mississippi State’s 3,556 all-time games and has directed MSU to nearly half of its 2,257 all-time wins. With his 27th season at State in 2006, Polk moved past former longtime State baseball skipper C.R. “Dudy” Noble as the longest-tenured baseball coach in Mississippi State history.

Perhaps no figure in all of college baseball is more widely recognized and respected than Polk, who became the winningest coach in SEC history during a remarkable 22-year run as Mississippi State head baseball coach from 1976 to 1997. During that span he compiled a 888-422 record (.678), leading the Bulldogs to SEC regular season or tournament championships five times (1979, 1985, 1987, 1989 and 1990) and securing MSU baseball’s place in college baseball’s national picture with 15 NCAA regional tournament berths and five appearances in the prestigious NCAA College World Series (1979, 1981, 1985, 1990 and 1997).

In 34 years as a collegiate head coach, he has piled up numbers more than worthy of his hall of fame recognition: a 1,350-667-2 (.669) overall career record and a 444-329 (.574) mark in SEC games; 23 NCAA district playoff and NCAA regional tournament appearances; eight NCAA College World Series berths; 35 All-Americans and 76 All-SEC players coached; and 171 that have signed professional baseball contracts, 21 of them advancing to the major leagues. In 1997 he became only the 16th coach in the history of college baseball to reach the 1,000-win milestone and currently ranks as college baseball’s seventh all-time winningest coach.

Tickets are $25 and include a meal and the opportunity to hear the legendary Hall of Fame baseball coach speak.  For tickets please call one of the numbers listed below.  Special bulk priced team rates are available.