Brookhaven Little Theatre presents ‘A Christmas Carol’ at The Haven 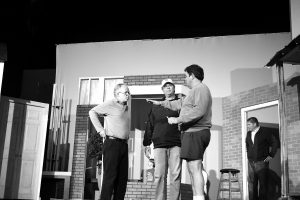 A man, having grown bitter with age, goes on a journey through his past, present and future to better understand himself and learn the true meaning of Christmas.

“A Christmas Carol” was first published in 1843, and it still resonates with the public imagination to this day. There have been countless adaptations to the tale over the years, and Brookhaven Little Theatre will be putting their own take on the classic starting Friday.

Doug Hoy is a relative newcomer to Brookhaven, but he’s a veteran at “A Christmas Carol.” He first got involved in the theater in his native Ohio, where “A Christmas Carol” was the first production he ever performed in.

He recently moved to Brookhaven for a career opportunity, and while he was excited to hear that the city featured a community theater, his intention was to spend a year getting settled before approaching them — a decision that didn’t last long.

“It took about eight minutes,” Hoy said. “I moved down here in late spring, early summer and found out they were casting for ‘It’s a Wonderful Life.’ I’ve done the last five (productions) in a row. So much for easing into things.”

Hoy found he was a great fit at BLT, and BLT was a great fit for him. He was immediately impressed by the way BLT holds programs for children, teenagers and adults all under one umbrella — something he hadn’t seen in his previous community theater experiences.

“It’s a great organization where you can start in the summer theater then work your way up to BLT,” Hoy said. “Everything is under one roof, literally.”

Hoy is directing “A Christmas Carol” at BLT this year, and while almost everyone is familiar with the tale, Hoy said it’s one that never gets old, and there’s something about experiencing a classic at a community theater that you can’t get anywhere else.

“There’s something about seeing it happen in front of you,” he said. “To see your brothers and sisters around town, people you know from work, or church or school transforming into a different character before your eyes. There’s something magic about community theater.”

That magic will be playing on Dec. 2-4 and Dec. 9-11. Fridays’ and Saturdays’ shows begin at 7:30 p.m. Sunday matinees are at 2 p.m. Tickets are $20, but there are also $15 tickets available for the back three rows. Tickets can be purchased at haventheatre.org or at the door, and doors open an hour before the production begins.

For over a decade, the Greater Hope Foundation has been working to feed those in need in the community through... read more