Glassman makes his niche in wood 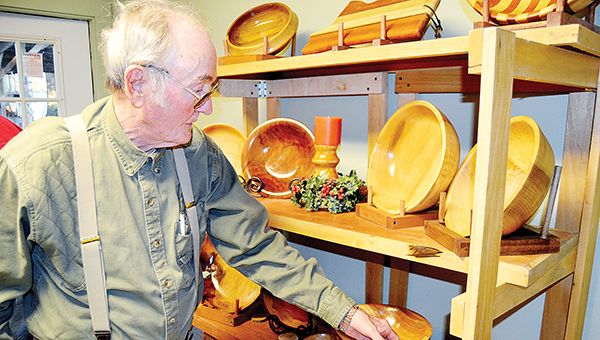 Maurice Smith has all 10 of his fingers, sawdust on his trousers and a fine appreciation for the natural nuances in a block of maple.

That alone should tell you he’s a wood worker, but to see the shelves of his art — and make no mistake, it is art — confirms his passion.

Big bowls, little bowls. Heavy bowls that probably wouldn’t blow away in a tornado and bowls as light as a feather.

Smith, 82, and his wife, Cindy, run Maurice’s Wooden Creations. Smith, who retired after 25 years at his family’s business, Brookhaven Glass and Mirror, is the creator of beautiful bowls, rolling pins and cutting boards. Cindy Smith, who helps him run the hobby-turned-business, shares his passion for woodworking, though 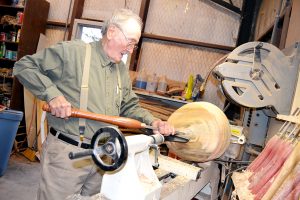 Photo by Donna Campbell/Maurice Smith uses a lathe and a variety of chisels to transform cut tree trunks into beautiful one-of-a-kind bowls in his workshop in East Lincoln.

she quickly admits she’s not as handy with the chisels and lathe.

Smith started working with wood when he was about 13, helping his dad in his cabinet shop. “He wouldn’t let me work on anything much except the lathe,” he said.

A lathe spins a block of wood while the cutter uses a chisel or similar tool to shape it into various pieces.

Smith’s father was worried the teen would get hurt on any of the more dangerous equipment.

He created a lot of spindles for his father.

“You couldn’t buy material in 1945 and he had to do a lot of furniture repair (for customers),” he said.

Smith made a few bowls and invested in a lathe that allowed him to make bowls 12 inches in diameter. “I wore that thing out trying to make too large a bowls,” he said.

His father sold his shop in ’51, and Smith joined the Army a few years later. After his discharge two years later, Smith got into the glass business, but his passion was still wood.

He likes the creative side of bowl-making. They’re all basically round, he said, “but hardly any of them are exactly the same shape. I don’t like duplicating anything.”

He added cutting boards and rolling pins to the mix to give his customers a variety of choices. “Everybody does not like a bowl,” Cindy Smith said.

Smith’s bowls come in all different sizes, weight and color depending on the wood he uses. Magnolia can produce light and dark bowls. If the wood comes from the center, near the heart, the bowls are a rich, dark brown.

“I haven’t seen a piece of wood that wasn’t pretty,” he said.

And Smith has worked with a lot — sassafras, poplar, pecan, cedar, elm, chinaberry, mulberry and cypress are just a few. ���Just about anything I can get my hands on,” he said.

He has a piece of mahogany he purchased for $150 but he hasn’t decided what he’ll make from it. It’s hidden away in a hall closet while he waits for inspiration to strike.

He hasn’t worked with sycamore or box elder much, but he’d like to.

Maple is a good wood. “It makes an absolutely gorgeous bowl,” he said.

Cherry and walnut are two of his favorites to use.

Walnut, however, is rare, and usually must be purchased. Most of the other wood he uses comes from friends or folks who hear about his hobby and call him to pick up a downed tree from their yard. Smith loads up his trailer and comes home with a load he’ll have a professional cut into usable sections. He’ll strip off the bark and let it dry. A two- to three-foot section of trunk can make two bowls.

Sometimes it takes two to three months for the wood to dry enough to carve. Sometimes it’s six to eight months and he’s waited as long as a year and half for some pieces to be ready to use. He’ll speed up the process by burying the chunks of wood in sawdust to absorb the moisture. Smith has a surplus of sawdust in his shop.

When he’s ready to create a bowl, his wife draws a circle on the trunk and he cuts off the corners with a band saw. He starts with a piece of wood 15 inches tall so it will fit into his lathe.

Though Smith started in his father’s cabinet business, he’s mostly self taught when it comes to the pieces he creates in his workshop. He’s read books, watched a lot of videos and talked to others who share his passion for bowl-making.

Smith tries to spend a few hours a day in his shop, but it mostly depends on whether his joints and COPD are cooperating.

He keeps a barstool nearby so he can rest a moment if he needs to take a break from bending over the lathe and pressing his chisels into the wood.

The Smiths also attend five or six craft shows a year including the Ole Brook Festival, the Neshoba County Fair and the Pearl Jingle Bell Festival.