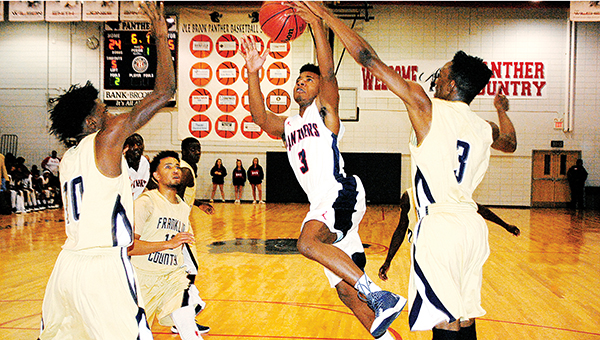 File photo/Brookhaven gurad Shon Blackwell (3) glides through the lane to score a layup in a game last December as Franklin County’s Jalon Dogan (3) and Ryan Johnson (10_ tries to deny the play.

After a 4-1 start to the season and a win over Loyd Star, the Brookhaven Panthers basketball team travels to Meadville to take on Franklin County in a non-conference tilt tonight.

The Panthers are led by senior guard Damarius Brooks, who is averaging 23.8 points, 5.8 rebounds and just under five assists per game so far this season. Brooks has been carrying the offense for the Panthers so far shooting 47 percent from the field. In the Panthers last game against Loyd Star, Brooks went 9-18 from the field with 26 points and also totaled five rebounds and six assists for the game.

“He’s our leader on and off the court,” head coach Jimmie Butler said about Brooks. “He’s constantly working on his game, in the film room. He’s improved his game so much and he’s a guy that all of our younger players look up to.”

Brooks wasn’t the only one who had a big game against Loyd Star. Junior guard Lafollette Bogan helped the scoring with 15 points on 5-6 shooting from the field. Bogan leads the team in rebounding, averaging just over eight rebounds per game. “That’s our guy in the post. He’s a tough player,” Butler said. “He brings toughness to this team and he can get down low and can get us rebounds when we need them.”

Senior Denarius Gray chipped in 14 points on 4-8 shooting and senior power forward Jashawn Perkins shot 7-11 from the field for 15 points along with eight rebounds. The Panthers are taking on Franklin County, who’s also on a great start to the season with a 5-1 record and 3-0 at home. Tipoff is set for 5 p.m. at Franklin County High School.

“We are a very young team in many areas and have gelled well together,” Butler said. “A lot of our younger guys will play tomorrow and get much needed game experience.”

The Brookhaven women’s basketball team also heads to Franklin County tonight. The Lady Panthers are 1-4 on the season as they look to bounce back after their 57-39 loss to Loyd Star last game.

The Lady Panthers are led by sophomore guard Shania Harris, who averages 13.4 points per game on 39 percent shooting for the season.

Tipoff is set for 6 p.m. at Franklin County High School.

Enterprise travels to Ridgeland tonight to take on St. Andrews Episcopal in their first true road game of the season. The Yellowjackets stand at 3-2 so far on the young season and look to bounce back after their 67-58 loss to West Marion loss on Nov. 18.

Enterprise will be looking to give St. Andrews their first loss of the season as they stand at 3-0 so far. Tipoff is set for 6 p.m. at St. Andrews Episcopal in Ridgeland.

Dylan Rubino I’m not from the state of Mississippi, but I guess you can say I’ve been around Mississippi for... read more