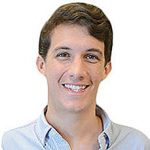 I’m not from the state of Mississippi, but I guess you can say I’ve been around Mississippi for quite some time now.

I am a recent graduate from the University of Mississippi with a bachelor’s degree in journalism and moved to Brookhaven just last week.

I’m originally from a state up north called New York, a long ways away from Mississippi. Growing up in New York and living there for all of my childhood, I could have never imagined moving to Mississippi, let alone going to college there. Attending Ole Miss was the best decision I ever made and my love for the state of Mississippi took off while there.

While attending Ole Miss, I became the sports editor for The Daily Mississippian, the student newspaper at Ole Miss. My first summer on the job in 2014, I covered the Ole Miss baseball team on their journey to the NCAA College World Series in Omaha, Nebraska. I covered the Ole Miss football program on their way to two consecutive seasons in New Year’s Six bowl games. After I graduated in August, the Ole Miss football team finished the 2016 season with a 5-7 record and a 55-20 blowout loss to in-state rival Mississippi State. Yes, I considered myself a good luck charm for Ole Miss during my time as an undergraduate.

During the summer of 2015, I interned at The Vicksburg Post, where I covered local high school and community sports throughout Vicksburg and Warren County. Tim Reeves and the entire staff welcomed me with open arms and I became immersed within a community that I never thought I would’ve been a part of. I had the opportunity to cover many stories that make Vicksburg a great place to live in and what made the community so special.

I covered stories about donuts, beauty pageants, basketball camps, summer football camps, lady golfers, and many more topics I never thought I would write about. The most important thing I learned was how a community newspaper ran and how much it means to bring a community together. My time in Vicksburg opened up a new world for me.

When Daily Leader publisher Luke Horton emailed me near the end of October and asked me to come in for an interview to be the new sports editor for The Daily Leader, I didn’t know what to expect. Once he explained to me how the Brookhaven community works and how the paper is ran, I knew this is the place where I wanted to be. The opportunity to tell the story of how sports in a small Mississippi community can bring people together is something I’m prepared for and something I look forward to doing.

I look forward to getting to know the people of Brookhaven and Lincoln County and telling their stories and sharing their experiences one day at a time.

Dylan Rubino is sports editor of The Daily Leader. Email him at dylan.rubino@dailyleader.com.

Leo Lewis Following the largest margin of victory in an Egg Bowl for Mississippi State since 1916, a pair of... read more