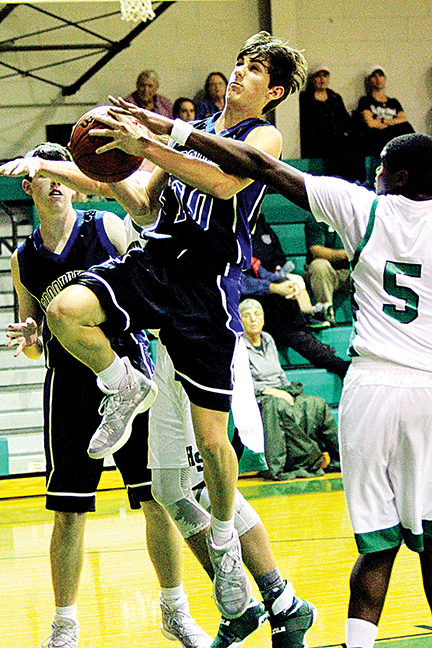 The Brookhaven Academy Cougars and Lady Cougars saw their first district action on Monday evening as they traveled to Natchez to take on the Cathedral Green Wave.

In varsity boys action, the BA Cougars (5-2) started the third quarter with a 18-8 run on their way to a 20 point lead to finish the frame.  With more of the same in the fourth, the Cougars kept the pressure on the Green Wave on way to an eventual 60-32 victory.  Ethan Nations paced BA with 14 points and seven rebounds.  Cade Brown added 10 to the Cougar total.  Derrian Batieste led the Green Wave with 16.

The Lady Cougars (4-4) carried a three point lead to the locker room at half only to see Cathedral answer with a 13-2 third quarter run.  The Lady Wave continued to make their free throws down the stretch and hold off a late charge by the Lady Cougars by a score of 54-48.  Jana Case has 15 points and nine rebounds to pace the BA.  Sissy Byrd had 11 points and nine boards of her own in support.  Marty Lewis led Cathedral with 13 points.

In junior varsity girls action, the BA JV Lady Cougars (8-1) overcame a sluggish first half of play to surge past the Lady Green Wave by a score of 31-14.  The Lady Cougars were led by Julianna Crosby and Makayla Martin with 8 points each.

The BA JV Cougars (7-1) took a 23-15 lead into the locker room at halftime with plans to build on the eight point cushion.  After a third quarter Cathedral run, the Cougars found themselves in a nip and tuck dog fight to the finish.    Tyler Fortenberry sank two free throws putting the Cougars up by three with under a minute to play.  A Gavin Brogden steal and layup sealed the deal for BA as time expired by a score of 33-28.  Britton Nelson paced BA with a 17 point night.  Tyler Fortenberry recorded eight point in the scoring ledger.

File photo/Brookhaven gurad Shon Blackwell (3) glides through the lane to score a layup in a game last December as... read more