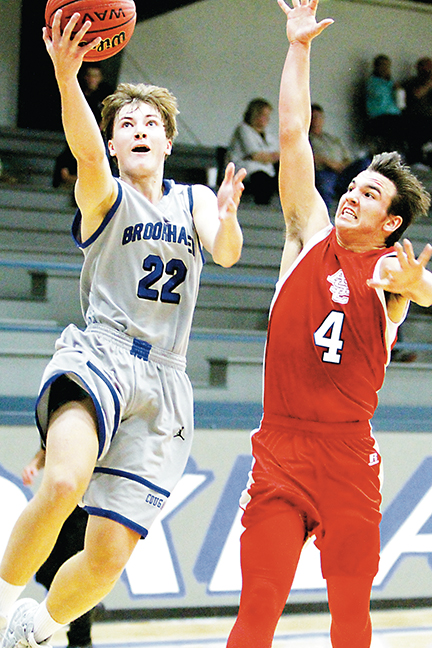 Photo by Sherylyn Evans/Tate Felder goes in for the basket against ASC’s Connor Murray.

The Brookhaven Academy Cougars and Lady Cougars were back at home Tuesday evening in a matchup with the Rebels and Lady Rebels from Amite School Center.

A packed house saw BA pick up four substantial wins as well as the future of BA Cougar Basketball with the Little Dribblers entertaining halftime show.

In varsity boys action, the Cougars (6-2) saw one of their highest offensive outputs of the year, capitalizing on pressure defense and posting 70 points in their win over the Rebels. Senior center Colton Watson led all scorers with 14 points. Tate Felder added 13 points and Ethan Nations chipped in 10 points to round out the double-digit scorers for the Cougars. 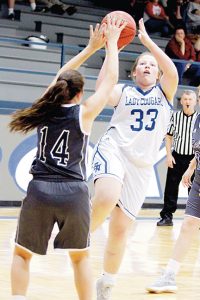 Photo by Sherylyn Evans/Cameron Watson goes up for the shot.

Coach Jason Case’s Lady Cougars (5-4) came out quick, jumping to a 16-4 first quarter lead and never looked back on their way to a convincing 52-33 win over the Lady Rebels. Jana Case led the way for the Cougars with an 18-point night. Sissy Byrd scored 16 points and Sophie Wilson added 12 points. Sarah Booty had 14 points to lead the Lady Rebels from Liberty.

In junior varsity girl’s action, the Cougars (9-1) roared past the Lady Rebels and picked up the win by a score of 39-20. AB Warren led all scorers with a 16 points for the game. Makayla Martin and Julie Anna Bartram followed with six and five points respectively.

The Brookhaven Academy JV Cougars (8-1) coasted to a 45-20 win to over the Rebels to end the night of basketball. Britton Nelson had 12 points for the Cougars and Tyler Fortenberry followed with five points for the game.