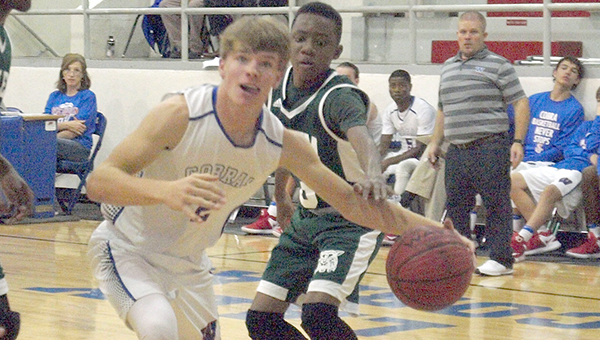 Photo by Tracy Fischer/Slay Acy drives in for the layup Tuesday night against Salem.

Wesson boys and girls and JV boys all won their games against Salem Tuesday night.

The Wesson Cobras took a win against the Salem Bobcats Tuesday night with a final score of 63-48.

“I think we played sluggishly at first but as the game continued, we came back,” Wesson head coach Rusty Newman said. “The guys played good team ball and I’m proud of them for getting the win.”

The Cobras struggled during the first quarter ending with a score of 15-14 even with sophomore guard Shemar Dickerson scoring 10 points.

Wesson came back in the second quarter with sophomore forward Jontavius Smith, sophomore guard JD Allen, Dickerson and senior guard Will Hulon putting points on the board to jump ahead of the Bobcats with a score of 28-26 going into the half.

The Cobras came back strong in the third quarter and took a wide lead to up the score 51-37.  Wesson held the lead and ended the game with a win and final score of 63-48.

Dickerson was the top scorer for Wesson with 23 points. Other top shooters were Smith with 15 points, Allen with eight points, sophomore forward Slay Acy with six points and freshman center Kenner Bizot with five.

Smith also added 12 rebounds and three steals for the game. Bizot had eight rebounds and Dickerson had six rebounds and two steals. From the free throw line, the Cobras shot with 6/10 accuracy.

Other shooters were Senior Jerrian Cowart helped contribute with 12 points and senior Leonardrick Riley with 10 points.

The Lady Cobras also won their game against the Lady Bobcats, 50-40.

“The girls came out and played hard,” Wesson head coach Candice McDuffey said. “We played good defense which helped our offense. We are going to have to work on turnovers, but we made key layups to win the game.”

The Lady Cobras jumped ahead of the Lady Bobcats in the first quarter and held the lead throughout the game.

Senior guards Aurianna Vaughn and Alashya Vaughn dominated the first quarter with eight and six points respectively to take the early lead with a score of 15-8.

Sophomore guard Alashyia Mims added seven points in the second quarter along with the Vaughn sisters to up the score to 27-22 going into half time. Wesson would hold a 39-29 lead heading into the fourth quarter and wouldn’t let up. The Lady Cobras held the lead to take the win with a final score of 50-40.  The top shooter for the Lady Cobras was Aurianna Vaughn with 15 points for the game.

Other top scorers were Mims with 12, Alashya Vaughn with 10 and freshman guard Shelbi Maxwell with eight. On defense, Mims was the top rebounder with 10 rebounds and also had five steals. Aurianna Vaughn and junior guard Jamiya Christmas had five rebounds each and Vaughn had three steals and Christmas with two.  From the free throw line, Wesson shot 7-11 from the charity strike.

For the Lady Bobcats, senior Jasmyn Henderson was the top scorer with 27 points.  On defense, senior Indya Quinn had nine rebounds and two steals. Henderson chipped in with seven rebounds and one steal.

The JV Wesson Cobras also got a win against the JV Salem Bobcats with a final score of 38-21.  Malik Clay was the top scorer of the game for the JV Cobras with12 points for the game.  Damian Gibson scored six points and Slay Acy and Kenner Bizot had five points each. The JV Cobras shot 6-8 from the free throw line.

For the JV Bobcats, Kendall Douglas was the top shooter with 12 points.

Photo by Sherylyn Evans/Tate Felder goes in for the basket against ASC’s Connor Murray. The Brookhaven Academy Cougars and Lady... read more