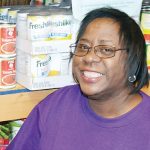 St. Paul Missionary Baptist Church at 508 N. Second St. operates one of the oldest food pantries in the state.

At between 25 and 50 families served in a month, they aren’t the biggest of the local food pantries, but they’ve been steadily serving the community since 1989. They also open their doors often — every Saturday from 10 a.m. until noon, and they will also open their doors during the week for an emergency.

“Our pantry is smaller than most of the pantries in Brookhaven,” assistant director Sue Smith said. “But we try to make it available.”

It’s a lot of work, and there are a limited number of volunteers working on the project. Smith said they are always looking for people interested in helping. The church can be reached at 601-833-8966. According to Smith, the best times to call are in the afternoon on Mondays, Tuesdays and Thursdays. Smith herself can also be reached at 601-835-1426.

St. Paul Missionary Baptist Church is a member of the Mississippi Food Network, and they follow the MFN’s guidelines on eligibility and income requirements. People new to the pantry will need to fill out a form with their income and household size and also present a photo ID.

The pantry is one of five organizations and churches that will benefit from the 13th annual Holiday Food Pantry Drive, which is a joint effort between Bank of Brookhaven and The Daily Leader.

In past years, individuals have donated more than $9,000 annually to support the drive.

Donors have the option of donating in honor or memory of someone, anonymously, as a business or as an individual. The food pantry drive will end Dec. 16.

Contributions to the Holiday Food Pantry also can be mailed to the bank, given to bank cashiers or donate through the drive-through windows.

Even if it rains, a local motorcycle club plans to bring some sunshine to a bunch of kids Saturday. The... read more